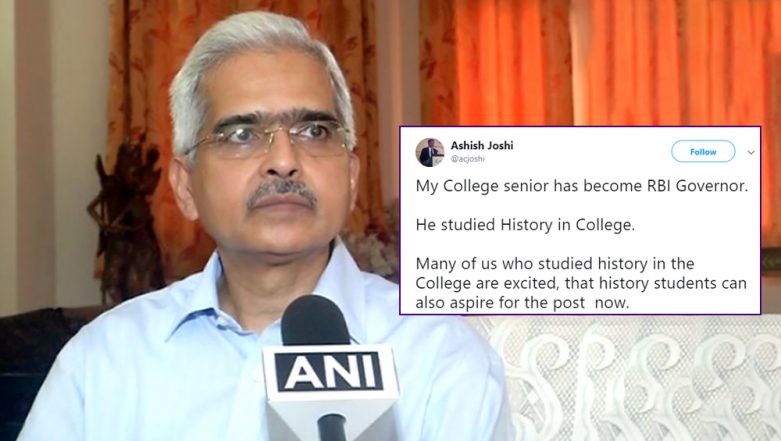 Former Economic Affairs Secretary Shaktikanta Das assumed charge as Reserve Bank of India (RBI) Governor on Wednesday replacing Urjit Patel. The decision to appoint the former secretary and current member of the finance commission as Governor came almost 24 hours after Patel resigned from the post. Meanwhile, Das' appointment has come as a shocker to many, especially Twitterati who couldn't believe that someone with MA in History could become the RBI Governor.

While there is no fixed eligibility for a person to be appointed as the RBI Governor, Twitterati couldn't digest the fact that History could land you a job as the chief executive of India's central bank. According to the RBI Act, PMO on the recommendation of the finance minister approves the appointment of RBI Governor. Shaktikanta Das Appointed as New RBI Governor After Urjit Patel's Resignation.

Shaktikanta Das is a BA and MA in History from Delhi University. He later pursued a financial management course from IIM Bangalore (as per a new Wikipedia edit made on December 11). During his career as an IAS officer, he has worked with various Indian state governments including Tamil Nadu. Manmohan Singh Says Urjit Patel's Resignation as RBI Governor a 'Severe Blow to the Nation’s Economy'.

Here is how Twitterati reacted:

Masters in Eco from Oxford

Doc in Eco from Yale University

He was a member of the Fifteenth Finance Commission of India and India's Sherpa to the G20.

Some history majors are Auditor Generals as well today. Never saw outrage. Shaktikanta Das is not just history major but also IIM and NIBM alumni. He has been in Finance Commission and Economic Affairs and Revenue Secretary. Lastly G20 Sherpa. What other qualification required? https://t.co/QDvgYMErK7

#RBIGovernor Appointment of Shaktikanta Das is definitely a ‘Historical decision’...

Our new RBI Governor Shaktikanta Das is an MA (History). Surely the most qualified person to be RBI Governor. #Modinomics

Will History be used for the future?

Modi can now come up with some new historical facts to blame Nehru for the current economic problems of the country.

He studied History in College.

Many of us who studied history in the College are excited, that history students can also aspire for the post now.

As Das' educational degrees surprises netizens, we take a look at the qualifications of the past RBI Governors:

Das, who becomes the 25th governor of the RBI, is a former IAS officer of Tamil Nadu cadre. On Monday Finance Minister Arun Jaitley said Das' appointment was necessitated by the resignation of Urjit Patel as Governor of the RBI. While Patel cited personal reasons, he resigned following issues with the Finance Ministry. After 1990s Patel is the first Governor to resign from the Governor's post before the expiry of his. His term ends in September 2019.

Finance Minister Arun Jaitley said, "I think, he (Das) has the right credentials. He has been extremely professional, has worked under various governments and has excelled himself. I am sure, in meeting the challenges before India’s economy as Governor of Reserve Bank, he will certainly act."