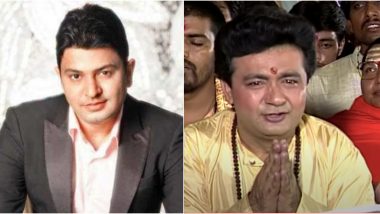 T-Series has been reaching new highs with each passing day. In April 2019, Bhushan Kumar's T-Series beat PewDiePie and became the world's most subscribed YouTube channel, now the channel has managed to create another record that's even more special. The Hanuman Chalisa video which was uploaded several years ago by the channel has set a massive viewing record. The T-Series Hanuman Chalisa video on YouTube has received 1 billion views. It has become the first devotional video to cross over a billion views. Takht: After Fox Studio’s Exit, Karan Johar Partners With Bhushan Kumar to Keep His Period Drama Going?

Sharing this massive achievement on Twitter, Bhushan Kumar also mentioned how his father, Gulshan Kumar who was the founder of the music label would be proud. He wrote, "It's a moment of joy for our @TSeries family today as our Hanuman Chalisa video becomes the 1st devotional video to cross 1 Billion+ views on YouTube. Dad, may your blessings always be with us & help us in achieving many more such milestones."

The Hanuman Chalisa video that has garnered such huge views has been sung by Hariharan. It seems the views on the video have probably spiked more amid coronavirus lockdown. The video of Hanuman Chalisa was uploaded in 2011 on the channel.

(The above story first appeared on LatestLY on May 28, 2020 10:48 AM IST. For more news and updates on politics, world, sports, entertainment and lifestyle, log on to our website latestly.com).