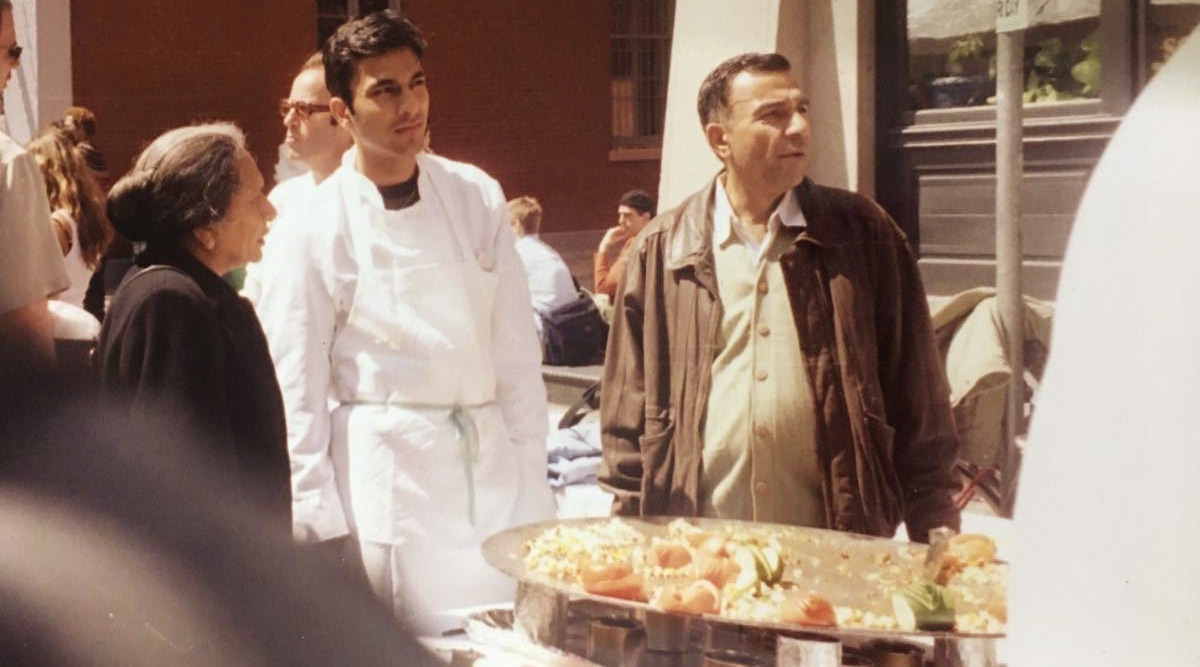 Celebrity chef, Vikas Khanna has been making news of late for his good deeds amid the COVID-19 pandemic. Khanna who has till now distributed around millions of dry ration to the needy across 125 cities in India has now created a history of sorts. As the chef recently organised 'world's largest Eid feast' in Mumbai where he fed food to around 2 lakh people. All that being said, looks like in-between this, Vikas is missing his late father, Davinder Khanna and poured out his heartfelt emotions on Twitter. Sharing a throwback picture along with his dad, the Michelin star took his fans back in time when his father was proud of him. Michelin Star Chef Vikas Khanna Names a Dish After Sonu Sood for All His Valiant Efforts Amid COVID-19 Pandemic and Their Inspiring Twitter Talk Needs Your Attention ASAP!

Vikas took to the micro-blogging site and reminisced the moment when 18 years ago his parents visited him in New York. He further added that when his father saw him selling food on the streets, his words were all about how proud he was to see him doing the same. However, Vikas at that time was embarrassed and felt that he let his dad down and 'hopes he is proud of him even today'. Indeed, we bet Vikas' father was proud of him then and also now. Bigg Boss 13: Asim Riaz’s Feeding Gesture for Chef Vikas Khanna Sparks Hatred, the Latter Hits Back Saying, ‘I’m an Indian and That’s My Faith’ (View Post).

18 years ago my parents visited me in NY.

When my father saw me selling food on the street, he told me, “I’m proud of you.”

I was very embarrassed and felt I let him down that day.

I hope he is proud of me even today. #MissingYouPapa pic.twitter.com/5gVpqqIrvY

As as they, charity is the biggest deed one can do and so what Vikas is doing amid the crisis is applaud-worthy. Meanwhile, on Friday, Khanna took blessings from Haji Ali Dargah in Mumbai and has reportedly arranged a massive Eid feast during Ramadan 2020 and provided food to 2 lakh people. Real heroes. Stay tuned!