Getting bored of the regular food, everybody explored some new recipes out of which some turned out great and became a trend. We at LatestLY, have brought together 11 bizarre food items that became a trend. 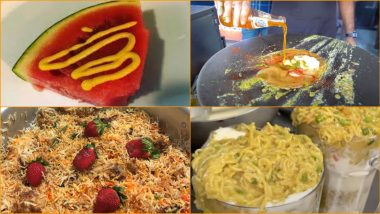 Everyone explored a chef in themselves amid the pandemic. With food junctions shut down during the lockdown, people tried their own hands-on cooking and baking.

Getting bored of the regular food, everybody explored some new recipes out of which some turned out great and became a trend. We at LatestLY, have brought together 11 bizarre food items that became a talk of the town, even if not in the nicest way.  Rasgulla Chaat is The Latest Addition to The List of Craziest Food Combinations.

A food blogger in Surat, Gujarat shocked people by going viral with a weird video of eggs made in fizzy Fanta.

We are doomed. Rasgulla chaat!! pic.twitter.com/tjRZ4lcMVl

And the favourite sweet dish turns salty and spicy. This is a completely mind-boggling invention.

Pan and Browny Combo. Only from Ahmedabad, Gujarat. 👍🏽👍🏽 pic.twitter.com/ggXwGURFS1

Shifting the taste of brownie from chocolate to paan is indeed a very tricky thing to do. This is another strange food item that came up from Gujarat

Starting with a TikTok challenge, watermelon with mustard sauce gained popularity this year. Some called it mouth-watering while many called it mind-boggling.

People have explored such weird food combinations this year out of which the most recent one is the Oreo Pakoda. The video went viral by a YouTube channel foodie incarnate by blogger Amar Sirohi.

Seeing the lollipop idli circulating in social media was ok, but this one 😱😱! pic.twitter.com/aKArtGMLyb

We had seen potato stuffing samosa and dal samosa till date, and now our new budding chefs have discovered strawberry and Chocolate Samosa.

A shop in Karachi, Pakistan is selling biryani topped with chocolate storm and it has left the internet completely blown.

We made “Strawbiryani” at home today and I am curious to know what desi Twitter has to say about it. pic.twitter.com/PCZ0Ug38gc

After chocolate Biryani, strawberry biryani took the internet on the storm with the twist in the traditional desi style biryani. 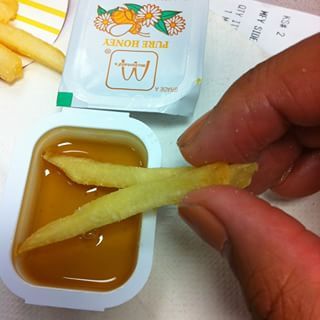 No, it’s not Honey Chilli potato, try these crispy potato fries dipped in Honey for a yummy taste.

Lately, many people are busy trying their hands-on cooking, and the above food combinations have completely blown the internet with their unexpected discovery.

(The above story first appeared on LatestLY on Jan 22, 2022 05:19 PM IST. For more news and updates on politics, world, sports, entertainment and lifestyle, log on to our website latestly.com).