Watermelon Sugar Meaning: Do You Know the Lyrics of Harry Styles' Grammy-Winning Song ‘Watermelon Sugar’ Means Oral Sex? At Least That's What Netizens Believe! Everything You Want to Know

Styles won his 2021 Grammy by beating Justin Bieber, Taylor Swift, Billie Eilish, Dua Lipa, and newcomer Doja Cat, however, surprisingly that's not what people are talking about. It is the meaning of "watermelon sugar" that has netizens hooked because most people think the song was about oral sex and no one had a clue all this while! 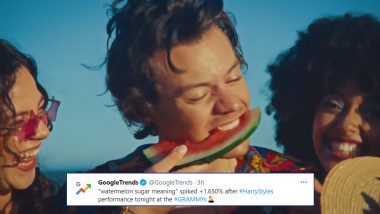 The 2021 Grammy Awards was special for British heartthrob Harry Styles who took home his first-ever Grammy for the 'Best Pop Solo Performance' for his superhit number 'Watermelon Sugar'. And although he was pitted against the best, it was no surprise that the peppy number won. Styles won his 2021 Grammy by beating Justin Bieber, Taylor Swift, Billie Eilish, Dua Lipa, and newcomer Doja Cat, however, surprisingly that's not what people are talking about. It is the meaning of  "watermelon sugar" that has netizens hooked because most people think the song was about oral sex and no one had a clue all this while!

Harry Styles, also opened the 2021 Grammy Awards with a mindblowing performance on 'Watermelon Sugar' and it was every bit good as the original track but soon  Google Trends tweeted out: "'watermelon sugar meaning' spiked +1,650% after #HarryStyles performance tonight at the #GRAMMYs" and fans couldn't resist flooding the reply section with funny memes and pics to reveal how "watermelon sugar" probably meant going down on someone or as you can formally say "oral sex". Well, there definitely isn't a confirmation yet, BUT it is difficult to not believe that it doesn't mean what netizens think it does.

What Does 'Watermelon Sugar' Mean?

"Watermelon Sugar", the popular track that took over TikTok and Instagram Reels is his fourth single off of the album and while the song always seemed quite sensual with Styles "eating out" the watermelons at the beach, nobody would have thought that the song was indeed about oral sex. The lyrics that go: "Tastes like strawberries on a summer evenin’/And it sounds just like a song/I want more berries and that summer feelin’/It’s so wonderful and warm" has netizens thinking if it is more about the physical love. Moreover, Harry Styles locket of a half-peeled banana isn't helping much!

In November, Zane Lowe talked to Styles about the specific meaning of the song. "Watermelon Sugar, which at this point is out, and everyone’s kind of figured out what it’s about. The joys of mutually appreciated oral pleasure.” It wasn’t really a question, but Lowe wanted Styles to confirm or deny whether it was. To which Styles cheekily replied, “Is that what it’s about? I don’t know.” Well, while we can only assume netizens are totally convinced 'Watermelon Sugar' means oral sex. Check tweets:

okay Google now tell me what it means pic.twitter.com/1TSe7iJDej

In the Pop Solo Performance category, Styles' 'Watermelon Sugar' was up against 'Yummy' by Justin Bieber, 'Say So' by Doja Cat, 'Everything I Wanted' by Billie Eilish, 'Don't Start Now' by Dua Lipa, and 'Cardigan' by Taylor Swift. The 63rd Annual Grammy Awards were delayed owing to the ongoing Covid-19 pandemic. The annual show shifted from its original January 31 broadcast to March 14.

(The above story first appeared on LatestLY on Mar 15, 2021 09:52 AM IST. For more news and updates on politics, world, sports, entertainment and lifestyle, log on to our website latestly.com).