While one cannot always predict what goes viral on the micro-blogging platform, the immediate response of a viral tweet is very much predictable — it is promoting projector lights. If you see most viral tweets on Twitter, the user later on promotes beautiful bedroom lights by oceangalaxylights.com. Let us understand more. 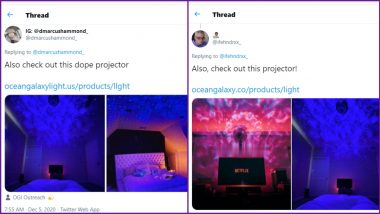 A lot of tweets go viral on Twitter in a day. It could be some really old picture blowing up on your timeline once again, or a genuinely funny meme that is extremely relatable to a lot of people at the same time. It could be something profound or absolutely silly. While one cannot always predict what goes viral on the micro-blogging platform, the immediate response of a viral tweet is very much predictable — it is promoting projector lights, tea tree mask, octopus plushies or seal pillows. If you see most viral tweets on Twitter, the user later on promotes beautiful bedroom lights by oceangalaxylights.com. Some of the other common promotions include anti-blackhead or tea tree pore removers. And if you are seeing it often, then it is one of the ways influencer marketing works online using viral content. Let us understand more. Twitter User's Explanation of Mansplaining as 'Correctile Dysfunction' is Going Viral; Women Cheer in Agreement.

When a tweet goes viral, a lot of people tend to check the profile. Some may check other tweets by the users or just retweeted the particular tweet. When a tweet really blows up, the idea is to promote something underneath. So some people give out their playlist links, art profiles, Instagram links and so on. But some of the other common products that are promoted include bedroom projector lights, seal pillows, anti-stress sticky balls or some beauty products like anti-blackhead or pore removers. The lights by ocean galaxy are the most common though. You will see the same promotion under a viral tweet of pictures of huge bald eagle recently.

Just found out the older British woman who’s been looking after my children is actually my EX-HUSBAND IN A COSTUME ????

Another One For Same Company

i have a galaxy light and can stare at my ceiling for hours. perfect christmas gift!! buy one here: https://t.co/GwoUMiQRzP pic.twitter.com/jbBfdaTB5h

Have y’all ever drank water that was out of this world after it’s been filtered? Well how about you experience being out of this world too? You’d probably die trying this in real life in space so why not doing the closest thing and not die ?

Anybody else SICK of the peeling green tea mask under every single viral tweet? I JUST want to read the comments. pic.twitter.com/KZIdVNyZYQ

Okay, what is up with that Green Tea Peel Mask thing? Why do I see it everywhere?

Like these users, if you observe viral tweets, you too will see same ads from OceanGalaxyLights.com or seal pillows or the green tea peel mask videos. All of these companies use these viral tweets/users with viral content to attach the link of their products.

Active users have noticed that all viral tweets promote these projector lights or some face masks, anti-pore masks in their following tweet thread. But those who are tweeting about these ads have probably never used the products, but are just getting paid to promote the items. As per a report by Bloomberg, Ocean Galaxy's promotion linked to a viral tweet can yield three or four orders for their lights. A user can get between $15 to $20 to link these projector lights in the tweet following their viral tweet. So, now it is up to you to think, whether you are seeing the "viral tweets" as ads for the lights instead of the viral content.

(The above story first appeared on LatestLY on Dec 09, 2020 01:41 PM IST. For more news and updates on politics, world, sports, entertainment and lifestyle, log on to our website latestly.com).