'Will MS Dhoni Join BJP?' Netizens Are Speculating About Former Indian Captain's Entry In Politics After He Announces Retirement From International Cricket 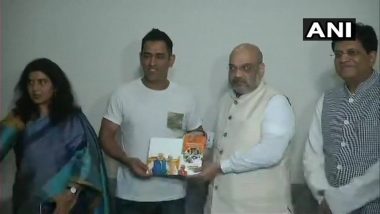 The 16-year run in international cricket of Mahendra Singh Dhoni came to a halt on Saturday, which also marked the 74th Independence Day of India. The Ranchi-born cricketer called it a day, posting a short statement on Instagram to confirm his exit from the game at the international level. What's next for Dhoni is yet to be known, but several among the Twitterati had the same question: "Will he join the BJP?" MS Dhoni to Join BJP? Here’s What Former Union Minister Sanjay Paswan Has to Say on Ex-Indian Captain’s Retirement Plan.

Speculations were abuzz on social media on Dhoni's possible entry into the realm of Indian politics. More specifically, a section of netizens were either rooting or predicting his debut in the Centre-ruling Bharatiya Janata Party (BJP). MS Dhoni Retires: Amit Shah, Sachin Pilot, Shashi Tharoor, Smriti Irani and Other Politicians React.

Not Only Dhoni, But Raina Also Predicted to Take Political Plunge

Some Also Hoping That He Does Not

I don’t care about cricket. I just hope this Dhoni guy does not end up with the BJP.

Rumour Mill On The Run

Notably, Dhoni is yet to drop any hint on his future endeavours. He was last in the limelight during the 2019 World Cup, when the former captain had played a heroic knock against New Zealand in the semi-final. The innings fall marginally short of taking India over the line. Following the defeat, Dhoni took a hiatus from international cricket.

A photo of Dhoni with former BJP president Amit Shah is considered as one of the basis for speculations of his political career being rife. Ahead of the general elections in 2019, the saffron party had launched a public reachout programme.

The Jansampark Yatra involved senior leaders visiting prominent personalities and handing them over a report card of the Narendra Modi government's performance. As part of the programme, Shah had met Dhoni and handed him over a booklet listing the successes of Modi government in its first tenure.

(The above story first appeared on LatestLY on Aug 15, 2020 10:35 PM IST. For more news and updates on politics, world, sports, entertainment and lifestyle, log on to our website latestly.com).