World Wildlife Conservation Day 2020: From Javan Rhinos, Polar Bears to Tasmanian Devil, Know About 7 of The Most Endangered Animal Species in The World

Human encroachment in forest areas, trading of animal parts, industries like ivory and fur, threaten a lot of species of their existence. Similarly the rising marine pollution has resulted in deaths of several marine animals as well. So on World Wildlife Conservation Day, we tell you about 7 animal species that are on the brink of extinction. 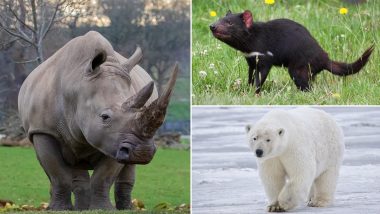 World Wildlife Conservation Day is marked every year on December 4. And as the name suggests, it is a day that raises awareness about wildlife conservation. World Wildlife Day is a call to action event which engages with conservationists and creates an awareness about wildlife species that are on the brink of extinction. Human encroachment in forest areas, trading of animal parts, industries like ivory and fur, threaten a lot of species of their existence. Similarly the rising marine pollution has resulted in deaths of several marine animals as well. So on World Wildlife Conservation Day, we tell you about 7 animal species that are on the brink of extinction.

Rhinos are known for their distinctive horns, but that quality has become a reason for their poaching. Rhino horns are used in some medicines and also have become a symbol of wealth. All species of rhinos face the endangering threat, but Javan Rhinoceros are the most threatened. The are closest to extinction with just about 40 to 60 of them left in the wild. From Funny Sounds to Friendship With Birds, Know Interesting Facts About Giant Rhinoceros.

Snow leopards are found in the high mountains of India, China, Nepal, Afghanistan, Russia and Mongolia. There are an estimated 4,080 to 6,590 snow leopards left in the wild.

You may have turtles laying eggs in millions but only a few of them actually survive to grow into the oceans. Two of the most endangered species of sea turtles include Hawksbill Turtle and Leatherback Turtles. These marine species are targeted by poachers for their meat, shells and skin. The prime nesting spots for the turtles are in Suriname, French Guiana, Grand Anse beach in Saint Lucia, Turtle Beach in Tobago, Guyana's Shell Beach and Gabon.

You have probably not even heard of this animal, because it is rarest large mammals on Earth. It was first discovered in 1992 in the Annamite Range in Vietnam and is only found there. Its discovery was considered one of the most spectacular ones in the 20th century! It is also called as Asian unicorn because of its elusive nature.

These gorillas live in the high mountain ranges almost over 8,000 feet of elevation. There are just about a little more than 1,000 that are left in the wild which makes them endangered. They are a bit aggressive in nature, which is often misunderstood and thus they are easily hunted. Habitat encroachment is another problem posing to their population. Did You Know Gorillas Make a New Bed Everyday? Know Interesting Facts About the Ape.

You probably remember Taz, the hungry animal from Disney cartoons. But Tasmanian Devils, the world's largest carnivorous marsupials do face the dangers of extinction. Their populations had dropped by 60% due to a contagious cancer back in 2008. It is said that there are just about 20,000 left now.

Polar bear which largely encompass the Arctic region are also decreasing in numbers. These white coloured bears are the largest extant bear species, as well as the largest extant predatory carnivore. The loss of sea habitat from climate change and no available food for survival has resulted in reducing their numbers. They are listed as a threatened species since the year 2008.

These are some of the animals that face the dangers of extinction. On World Wildlife Conservation Day, it is important to know which animals need protection and how we as individuals can help in their welfare. There are several programmes that have launched conservation campaigns for some of these species.

(The above story first appeared on LatestLY on Dec 04, 2020 09:32 AM IST. For more news and updates on politics, world, sports, entertainment and lifestyle, log on to our website latestly.com).