Dananjaya dismissed Evin Lewis, Chris Gayle and Nicholas Pooran to complete his hat-trick. He became the 14th bowler to take three in three in T20I cricket and third player from Sri Lanka. But his day turned sour when Kieron Pollard smashed Dananjaya for six 6s in his very next over to create a record of his own. 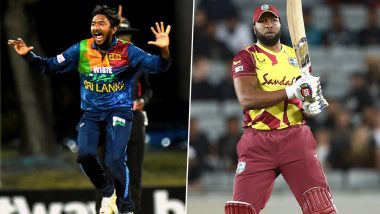 Kieron Pollard became only the second cricketer after Yuvraj Singh to score six sixes in an over in T20I cricket. Akila Dananjaya, who had taken a hat-trick an over earlier, was smashed around the park and ended up conceding 62 runs in his four over-spell, 36 of which came in a single over. Pollard is also the third cricketer after Herschelle Gibbs (against Netherlands at 2007 World Cup) and Yuvraj Singh (against England at 2007 Twenty20 World Cup) to smash 6 sixes in an over in international cricket. The West Indies captain achieved the feat in the sixth over, two after Dananjaya seemed to have rattled Windies’ chase with a hat-trick. Keiron Pollard Becomes Third Batsman To Hit Six 6s in an Over in International Cricket.

Dananjaya dismissed Evin Lewis, Chris Gayle and Nicholas Pooran to complete his hat-trick. He became the 14th bowler to take three in three in T20I cricket and the third player from Sri Lanka. Lasith Malinga and Thisara Perera are the other bowlers from the island nation to complete a hat-trick in T20Is. Malinga achieved the feat twice.

Lewis was out playing a shot too many in the second delivery of the fourth over. The left-handed batsman had smashed 28 off 10 deliveries before finding Gunathilaka at long-off. Out-stepped Chris Gayle for his first international match in almost two years. But the Universe boss lasted just one delivery getting trapped right in front of the wicket in the first ball he faced. He was beaten on the outside edge and struck on the back-pad. Gayle also cost his side a review.

Nicholas Pooran was then dismissed caught by wicketkeeper Niroshan Dickwella. Pooran looked to drive the first delivery he faced but edged it to Dickwella, who took a low sharp catch. Dananjaya completed his hat-trick leaving West Indies trailing at 57/3, which will soon become 62-4, in a 132-run chase.

Pollard arrived after Pooran was out handing Dananjaya his hat-trick moment. The West Indies skipper looked in the mood to exact revenge and smashed the spinner for six consecutive 6s to create a record of his own. The 27-year-old was smashed over long-on in the first delivery he bowled to Pollard. The second went straight over the bowler’s head while Pollard sent the third ball over long-off. Dananjaya kept bowling full and wide outside off, allowing the big man to free his arms and swing his bat.

Kieran Pollard does a Yuvraj Singh, smashes 6 sixes in an over after Dananjaya hat-trick#WIvsSL pic.twitter.com/IeGyAiUjab

The fourth ball was a wrong’ un and Pollard spotted it quickly and sent it through deep mid-wicket for another maximum. He dragged the fifth again over long-on before registering history with a six over deep mid-wicket in the final delivery. The Windies skipper took 36 from 6 balls and raced to 38 from 11 deliveries before he was out.

But despite Pollard’s dismissal, West Indies had little trouble in chasing down the total, with Jason Holder’s 29 from 24 balls taking them home. Holder finished off the game with a six off Nuwan Pradeep in the first ball of the 14th over. West Indies hit  13 sixes and seven fours in their innings.

(The above story first appeared on LatestLY on Mar 04, 2021 11:20 AM IST. For more news and updates on politics, world, sports, entertainment and lifestyle, log on to our website latestly.com).