Dean Jones’ comments came after former Aussie skipper Michael Clarke had caused an uproar earlier this year when he said that the Australian cricketers ‘sucked up’ to India and were ‘too scared’ of sledging Kohli and co. during the 2018-19 Test series as they wanted to save their lucrative IPL contracts. 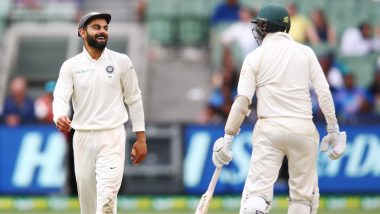 Former Australia cricketer Dean Jones rubbished Michael Clarke’s remarks that Australian players did not sledge Virat Kohli during the 2018 home series to save their Indian Premier League (IPL) contracts. Instead, offering an explanation the cricketer-turned-commentator mentioned that the players knew the likes of Kohli and MS Dhoni ‘likes confrontation’ as get them going and the Aussies made sure they did not give him that opportunity. Jones, regarded as one of the best ODI batsmen of his generation, also said that the Australian teams he played in did the dame with Viv Richards, Javed Miandad or Martin Crowe. India vs Australia 2020-21 Schedule, Free PDF Download: Get Fixtures and Venue Details of IND vs AUS T20I, Test and ODI Series.

Jones’ comments came after former Aussie skipper Clarke had caused an uproar earlier this year when he said that the Australian cricketers ‘sucked up’ to India and were ‘too scared’ of sledging Kohli and co. during the 2018-19 Test series as they wanted to save their lucrative IPL contracts. India eventually went on to win the four-match Test series 2-1 and script history as their first-ever Test series on Australian soil. Pat Cummins Dismisses Michael Clarke’s Australia Cricketers ‘Sucking Up to Virat Kohli’ Remark, Says Team Needed to Tone Down Aggressive Approach.

But contradicting those remarks, Jones said that "I will tell you the reason why they went quiet on Virat. The 59-year-old was speaking in a live show on Sportscreen YouTube channel. “Because we went quiet when Viv Richards came out to bat. We went quiet on Javed Miandad, on Martin Crowe. And there is a reason behind that -- You don't upset the bear, you don't upset Virat Kohli or MS Dhoni because this is what they like - a confrontation. Don't give them any oxygen.

Jones, who was inducted into the Australian Cricket Hall of Fame last year, also rubbished Clarke’s claims that players were saving IPL contracts. “I find this reason about not upsetting Virat because of IPL contracts a bit rubbish,” he said. “Is Virat going to stop anyone from playing? That is down to the coaches and managers."

(The above story first appeared on LatestLY on Jun 04, 2020 12:23 AM IST. For more news and updates on politics, world, sports, entertainment and lifestyle, log on to our website latestly.com).