The defeat against Mumbai Indians notwithstanding, Gujarat Titans' charismatic spinner Rashid Khan showed on Friday that his bowling is not to be taken lightly even though he is passing through a lean patch and has not been as effective wicket-wise as some other bowlers in the team. 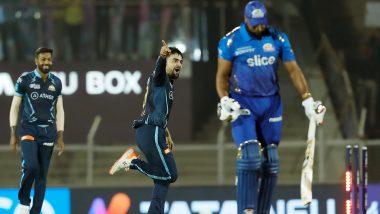 Mumbai, May 7: The defeat against Mumbai Indians notwithstanding, Gujarat Titans' charismatic spinner Rashid Khan showed on Friday that his bowling is not to be taken lightly even though he is passing through a lean patch and has not been as effective wicket-wise as some other bowlers in the team. The 23-year-old -- who is playing the role of a utility batsman to perfection while his bowling is 'lacking sting' in IPL 2022 as critics have pointed out -- hit back by taking two wickets for 24 runs in his four overs -- the best bowling figures for Gujarat Titans in the game against five-time champions Mumbai Indians at the Brabourne Stadium on Friday. GT vs MI, IPL 2022: ‘Slow’ and Steady Daniel Sams Choked Gujarat Titans.

While the Hardik Pandya-led franchise lost by five runs from a winning position, Rashid stood out for the way he shackled the Mumbai Indians batting, snaring two of the most dangerous batters, Rohit Sharma and Kieron Pollard, and in the process restricting them to a below-par 177/6. And, while the target looked quite achievable till the last over, MI left-arm pace bowler Daniel Sams bowled a superb last over to deny the IPL 2022 table-topper victory. Rashid Khan's utility for Gujarat Titans has never been in question. He can bowl amazing spells and can whack the ball at strike rates of 200 or beyond. Gujarat might not have won against Mumbai Indians, but the fact that he has helped pull off amazing chases earlier makes him one of the best all-rounders in IPL 2022.

He had come into the game against MI with nine wickets in 10 matches, at an unusually high average of 30.77. There had been some rumbles about the lack of wickets too. But if one really thought about it, it didn't mean much. The nature of T20 cricket is such that all the players go through a lean patch. While people though Rashid had suddenly become ineffective, one look at his economy rate showed that he was busy choking rival batters and stemming the flow of runs, if not taking wickets. He came into the game against Mumbai Indians with a superb economy rate of 6.92 per over, improving it further by conceding just 24 runs in his four overs on Friday evening. He revealed post match that he is consciously making an effort to bowl restrictive spells. "Yes, while bowling in T20 it's always great to take wickets, but for me it's different a bit," Rashid said. "I always focus on the economy. That is something which I always have in my mind: to bowl well and economically. That is something that always puts the pressure on the batsmen, and we expect wickets to come at the other end. GT vs MI, IPL 2022: Two Run-Outs Seal Gujarat Titans’ Fate Against Mumbai Indians.

"Yes comparing to other IPLs, I got a little bit fewer wickets this year, but it's not that much different, just two-three wickets. Last time as well, I had 13-14 wickets in 11 games, this year it's 11 wickets. It's a matter of three-four wickets. In a couple of games I haven't bowled as well as I should have, but that is T20. There is so much for you to learn and every day is a good day to learn," added Rashid. What stands out for the young Afghanistan player is that fact that he is very aware of his own game, and he's a perfectly selfless team-man, who knows he can bowl restrictively and afford those at the other end the opportunity to rake in the wickets because of the pressure he's built. Sooner or later, he will find a way to overcome the 'lean patch', like one saw against Mumbai Indians. He struck key blows, getting a free-flowing Rohit Sharma out lbw. He then sent back Pollard, knocking the stumps back with an inch-perfect leg-break. If there were any doubts about Rashid the bowler, the game against Mumbai Indians ought to have laid them to rest.

(The above story first appeared on LatestLY on May 07, 2022 11:52 AM IST. For more news and updates on politics, world, sports, entertainment and lifestyle, log on to our website latestly.com).