India vs Australia 1st ODI 2020: Rohit Sharma vs Mitchell Starc, David Warner vs Jasprit Bumrah and Other Exciting Mini Battles to Watch Out for in Mumbai 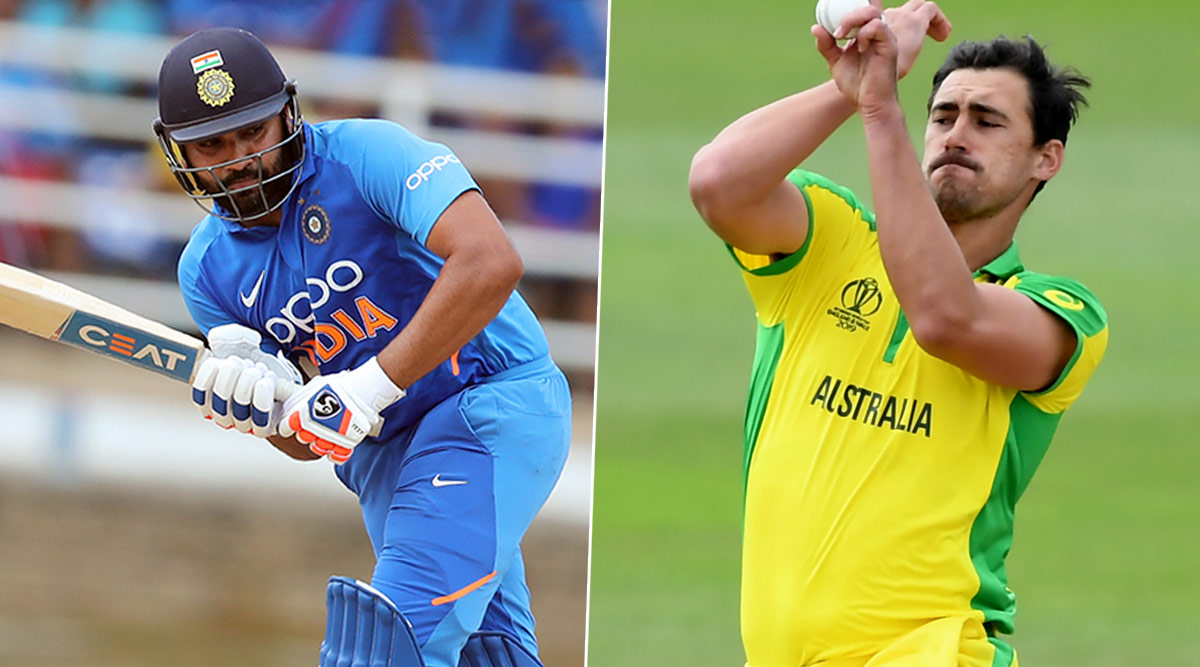 The much-awaited India vs Australia ODI series is around the corner and the three-match affair is certainly expected to witness some mind-boggling action. The opening ODI will be played on January 14 at the Wankhade Stadium in Mumbai. Virat Kohli and Co have enjoyed a sensational run in the ongoing home season and will eye to continue their dominance against the Men in Yellow too. On the other hand, Australia have also been on the roll in white-ball cricket and will fancy their chances of defeating India at their own fortress. The first IND vs AUS ODI is expected to witness a tight battle between the bat and the ball and below, we’ll look at some such mini battles. India Vs Australia, Live Cricket Score 1st ODI Match.

Aaron Finch and Co must not have forgotten their 2019 Tour of India where they thrashed the home side 3-2 after being 0-2 down. Also, that triumph came in the absence of David Warner and Steve Smith. So, with their return, Australia’s confidence must be high. India, on the other hand, will seek redemption in the forthcoming series and the form is certainly on their side too. Meanwhile, let’s look at some mini battles which can enhance the thrill of the opening ODI. Virat Kohli Confident Ahead of India vs Australia ODI Series 2020.

The swashbuckling opener will be making a comeback in the first ODI and will look to extend his run-scoring streak in 2020. He, however, will be challenged by the thunderbolts of Mitchell Starc and the tussle between the two will certainly be an interesting one. The left-arm pacer looked at his prime in Australia’s recent assignments and is expected to torment the Indian batsmen too. Nevertheless, piercing Hitman’s defences will not be an easy task and let’s see, how the battle goes between the two.

Another fascinating battle which will definitely be seen in the opening ODI is between Jasprit Bumrah and David Warner. The Indian pacer made a comeback in the recently concluded T20I series against Sri Lanka and showed no signs of rustiness whatsoever. However, Warner also has played some brilliant knocks in recent times and thus, dismissing him early in the innings will not be easy. However, Bumrah tends to do well against left-handed batsman and will seek to get the better of the dasher in Mumbai.

The Indian skipper enjoys to play against Australia and has a splendid record against them. Also, he smashed two centuries when Australia toured India for an ODI series. However, the visitors will rely on Pat Cummins to get the better of Kohli and put Australia ahead in the match. The pacer breathed fire during the recently concluded Test series against New Zealand and denting the Indian batting line-up will be his next target. However, challenging Kohli is in own territory is certainly a big deal and Cummins needs to be at his best.

This will be Australia’s first ODI match since the 2019 World Cup and they will eye to start off the series in style. Many of their players like, Warner, Smith and Cummins have played a lot of matches in Indian Premier League (IPL) and thus, are very well aware of the sub-continental conditions. Nevertheless, India have named a full-strength squad and let’s see, how the opening encounter will fare off.