Having failed against Archer several times, the Australian southpaw was expected to rectify his mistakes, but that wasn’t a case at all. Chasing 155 at the Dubai International Cricket Stadium, Warner and Archer met in the first over with the former struggling straightway. 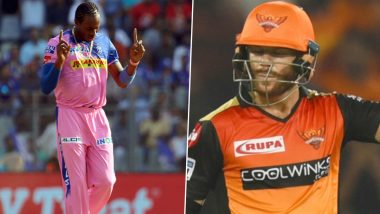 The inevitable has happed again as Jofra Archer has dismissed David Warner during the Rajasthan Royals vs Sunrisers Hyderabad match in the Dream11 Indian Premier League (IPL) 2020. The England pacer has been nothing less than a nightmare for the SRH skipper in recent times, dismissing him six times in their last seven face-offs. Having failed against Archer several times, the Australian southpaw was expected to rectify his mistakes, but that wasn’t a case at all. Chasing 155 at the Dubai International Cricket Stadium, Warner and Archer met in the first over with the former struggling straightway. After teasing the left-handed batsman in the first three balls, Archer once again got his man as the dasher went back with just four runs in his kitty. RR vs SRH Score Updates IPL 2020.

Twitterati were enthralled by the speedster’s dominance as they flooded social media with funny memes. Warner has been struggling against the Barbados-born bowler since Australia’s recent tour of England. Archer dismissed the 33-year-old four times in their five meetings. Things were expected to change in IPL as it was taking place in the dry and slow pitches of UAE. However, the England star continued to spit venom and dismissed Warner not once but twice. Jofra Archer Imitates Riyan Parag’s Bihu Dance.

A brilliant first over from Jofra Archer to David Warner. Beautiful bowling, an edge and finally a catch to Ben Stokes at second slip. Outstanding fast bowling from @JofraArcher.https://t.co/3bAiDURQSc #Dream11IPL

Archer get Warner in first over: pic.twitter.com/7TfnIahA9l

David Warner To Jofra Archer After Getting Out Everytime From Him :#BestHomeCommentator@Housing pic.twitter.com/TuAhriP6PE

Speaking of the dismissal, it was back of a length delivery which took the outside edge of Warner’s bat. However, credit should also go to another England player who took a stunning catch at the second slip. Meanwhile, let’s look at how netizens reacted, seeing Archer’s stellar show.

Meanwhile, Rajasthan Royals posted 154/6 while batting first thanks to significant cameos from Sanju Samson, Riyan Parag and Jos Buttler. Notably, SRH haven’t won a single game while chasing this season and with Warner back in hut early, it will be interesting to see how the Orange Army will bounce back.

(The above story first appeared on LatestLY on Oct 22, 2020 10:22 PM IST. For more news and updates on politics, world, sports, entertainment and lifestyle, log on to our website latestly.com).