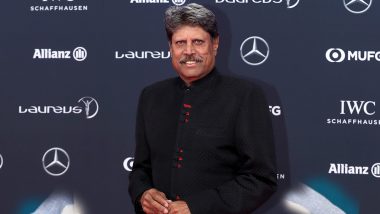 Former Indian cricketer team captain and World Cup winner, Kapil Dev, wished everyone on the occasion of Diwali while providing an update on his health. The 61-year-old recently suffered a heart attack and was immediately rushed to the hospital, where doctors performed an emergency angioplasty. A couple of days after successful surgery, the former cricketer was discharged from the hospital. Legendary Cricketer Returns to Golf Course Two Weeks After Successful Heart Surgery.

Kapil Dev on the auspicious occasion of Diwali extended greetings and also updated fans about his health. ‘Happy Dipawali to everybody and I hope this year brings lots and lots of happiness to everybody. Thanks for your wishes. I am healthy and happy, heart is working good but I want to wish everybody lots and lots of happiness around the world.’ The veteran cricketer said on his official Twitter handle.

Kapil Dev was recently seen playing golf in Delhi after recovering from his surgery. The 1983 World Cup winner had taken up the sport after his bidding adieu to cricket in 1994. Dev has taken part in many golf events post-retirement and was also named in the Indian team for the 2018 Asia Pacific Seniors in Japan.

Good to be back on the Golf Course .... pic.twitter.com/M3V6D7KEoF

Kapil was admitted to a hospital in the south of Delhi on October 23 for chest pain. He then underwent an angioplasty and was discharged on October 25. ‘Thank you everyone for all the love and concern. I am overwhelmed with good wishes and well on the road to recovery’ the 61-year-old had said following the successful surgery.

(The above story first appeared on LatestLY on Nov 13, 2020 07:41 PM IST. For more news and updates on politics, world, sports, entertainment and lifestyle, log on to our website latestly.com).