LSG vs RCB IPL 2022 Eliminator Dream11 Team: Deepak Hooda, Dinesh Karthik and Other Key Players You Must Pick in Your Fantasy Playing XI

Dream11 is one of the popular fantasy games and has become quite popular among its users as it allows them to earn real cash, and a great way to do that is by picking the right fantasy playing XI. So here are some players you must-have in your LSG vs RCB IPL 2022 Dream11 Team. 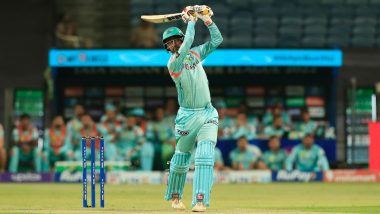 As we progress to another match of IPL 2022 playoffs, it's an eliminator game between the third-ranked team on points table Lucknow Super Giants (LSG) and fourth qualified side Royal Challengers Bangalore (RCB) on May 25 2022 at the Eden Gardens, Kolkata. LSG have an upper hand over the opponents RCB whose fate of play-offs was decided in a nerve wrecking encounter between Mumbai Indians (MI) and Delhi Capitals (DC). Despite all the odds, RCB has many game changers likewise LSG too have star performers who can set the tone of the game right. Dream11 is one of the popular fantasy games and has become quite popular among its users as it allows them to earn real cash, and a great way to do that is by picking the right fantasy playing XI. So here are some players you must-have in your LSG vs RCB IPL 2022 Dream11 Team. LSG vs RCB, IPL 2022 Eliminator Live Cricket Streaming: Watch Free Telecast of Lucknow Super Giants vs Royal Challengers Bangalore on Star Sports and Disney+ Hotstar Online.

He didn't go big this season but Glenn Maxwell's many miniature cameos in various matches got him central seat among other players in the team. Despite not being able to take maximum number of wickets, Glenn Maxwell's economy rate of 7.05 as compared to other spinners remained splendid this season. The all-rounder abilities of Maxwell makes him among the best picks for players to watch out as we move on to an eliminator match of IPL 2022 on Wednesday.

The impeccable finisher that got discovered in the form of Dinesh Karthik in IPL 2022 might get into big deals ahead of the World T20 Cup in October for his sensational comeback after so long. Dinesh Karthik's count of runs in 14 matches of IPL 2022 remained 287 with a spectacular strike rate of 191.33 runs. He will be key to RCB in an important eliminator of play-off against Lucknow Super Giants on Wednesday and among the players to watch out for. LSG vs RCB Dream11 Team Prediction IPL 2022: Tips To Pick Best Fantasy Playing XI for Lucknow Super Giants vs Royal Challegers Bangalore Indian Premier League Season 15 Eliminator.

The Australian power all-rounder has been tremendous this season at last moments for his side despite being moved up and down the order constantly. Though Marcus Stoinis didn't got much opportunity to bat or ball, but he has been impressive overall and can prove handy in a crucial encounter like an eliminator game and will be among the players to watch out for as LSG take on RCB on Wednesday.

He made four half centuries this season and scored 406 runs , his best ever performance in IPL career. Deepak Hooda has also helped his side in building up innings when their top order failed to deliver in this season. He made up a special space for himself in Lucknow Super Giants batting line-up with his exemplary performance throughout the season so far and could prove fatal to opponents in the eliminator on Wednesday.

He has proved out to be the key bowlers for Lucknow Super Giants and won them various matches with his exceptional bowling. Mohsin Khan has scalped 13 wickets in eight matches that 23 year old played in IPL 2022 at an incredible economy rate of 5.93. He will be among the key players in an important eliminator between LSG and RCB on Wednesday.

(The above story first appeared on LatestLY on May 25, 2022 05:40 PM IST. For more news and updates on politics, world, sports, entertainment and lifestyle, log on to our website latestly.com).