While Chris Lynn shone in Brisbane Heat's recent win over Melbourne Stars in KFC Big Bash League (BBL) 2020-21, his teammate Max Bryant stole the show with an extraordinary fielding effort. His save near the boundary ropes reminded fans of Nicholas Pooran's gravity-defying save in Indian Premier League (IPL) 2020. 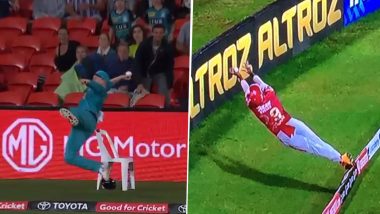 While Chris Lynn shone in Brisbane Heat's recent win over Melbourne Stars in KFC Big Bash League (BBL) 2020-21, his teammate Max Bryant stole the show with an extraordinary fielding effort. The incident took place in the ninth over of the second innings. Melbourne's Nick Larkin smashed Lewis Gregory's slower delivery which looked all set to cross the deep-midwicket boundary rope. However, Bryant timed his jump to perfection, took the catch in the air and even released the ball before landing beyond the boundary rope. Cricket fans were left jaw-dropped as social media got flooded with praises for the opener. BBL 2020–21: 3 Matches Moved From Sydney to Canberra Due to Border Restrictions.

The official Twitter page of Big Bash League also shared the video of Bryant's effort, calling it the best ever save in cricket history. Notably, Heat won the game narrowly by 18 runs and Bryant's effort – which reduced the certain-looking six to a double – was indeed crucial. Bryant's effort also reminded fans of Nicholas Pooran's gravity-defying save in Indian Premier League (IPL) 2020. The Kings XI Punjab (KXIP) put up a similar fielding exhibition in Sharjah and just like Bryant, converted a six into a double. Back then, cricket world went berserk with Pooran's heroics, and now Bryant's save sent them in nostalgia. Have a look at how they reacted.

This could be the best fielding game we've ever seen!! #BBL10 pic.twitter.com/QoSBB1blxE

This is at the same level as Nicholas pooran one in IPL. Absolutely brilliant. Top Effort. 👏👏👏👏👏

The greatest piece of fielding I have EVER seen in my life!!!

Pooran and Agarwal in IPL and now Max Bryant in BBL. What a save..🙌@BBL @HurricanesBBL

Interestingly, Pooran – who's plying his trade for Melbourne Stars in BBL 8 – witnessed Bryant's heroics from the opposition camp.

Coming to the game, the rain-curtailed encounter reduced to a ten-over affair.  Skipper Chris Lynn scored a 23-ball 48 as Heat posted 115/3, batting first at the Carrara Oval in Queensland. Chasing a revised target of 129 runs, Glenn Maxwell-led Stars were restricted to 110-5 and eventually lost the game by 18 runs.

(The above story first appeared on LatestLY on Jan 08, 2021 06:20 PM IST. For more news and updates on politics, world, sports, entertainment and lifestyle, log on to our website latestly.com).