MI Playing XI in IPL 2020: 4 Overseas Players Who Could Feature in Mumbai Indians Line Up Throughout Dream11 Indian Premier League

Mumbai Indians are the most successful side in the history of the franchise and most of the success has been down to the main core of players. However, with the tournament’s highest wicket-taker opting out of the competition, MI will have to tinker with their line-up and with only four foreign players allowed, it can be a tricky situation. 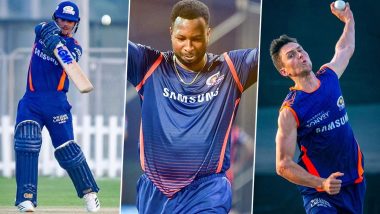 Record champions Mumbai Indians will begin their IPL 2020 journey on September 19, 2020, when they take on Chennai Super Kings in the season opener. The record champions will once again be captained by Rohit Sharma and ahead of the start of this season, received a huge blow when Lasith Malinga decided to opt-out due to personal reasons. MI have plenty of players to replace the Sri Lankan and it will be interesting to see who make it into the starting XI. MI Squad for IPL 2020 in UAE: Check Updated Players' List of Mumbai Indians Team Led by Rohit Sharma for Indian Premier League Season 13.

Mumbai Indians are the most successful side in the history of the franchise and most of the success has been down to the main core of players that have been with the franchise for over the years. However, with the tournament’s highest wicket-taker opting out of the competition, MI will have to tinker with their line-up and with each team allowed to place only four foreign players, it can be a tricky situation. So before IPL 2020 starts, we take a look at four overseas players who could be a regular feature in the Mumbai Indians side. MI Team Profile for IPL 2020: Mumbai Indians Squad in UAE, Stats & Records and Full List of Players Ahead of Indian Premier League Season 13.

The West Indian has been a regular feature in the Mumbai Indians team since joining the club in 2010. The 33-year-old has won four titles with the franchise after some poor season’s rediscovered his form last season, scoring with a strike rate over 150. So it won’t be any surprise of the all-rounder keeps his place in MI side.

The New Zealand pacer is considered as one of the best bowlers in the world at the moment and is expected to replace Lasith Malinga in the team. Boult has a decent record in IPL as well, taking 38 wickets in 33 games and his experience in the shorter format will be crucial for Mumbai Indians.

The Australian was bought by Mumbai Indians during the player auction which was held in December last year. Lynn has made a name for himself as one of the most destructive batsmen in white-ball cricket and will take his place at the top of the MI batting order. His experience and record in IPL will come in handy for the record champions.

All these four players are expected to be in the MI team for throughout the season but things could change if injuries and form play a part. Mumbai Indians have the likes of Mitchell McClenaghan, Nathan Coulter-Nile, James Pattinson and Sherfane Rutherford to count on. The record champions take on Chennai Super Kings in their opening game at the Sheikh Zayed Stadium in Abu Dhabi.

(The above story first appeared on LatestLY on Sep 15, 2020 05:00 PM IST. For more news and updates on politics, world, sports, entertainment and lifestyle, log on to our website latestly.com).