Mohammed Amir Talks About Returning To Pakistan Test Team, Says 'It Is Too Early'

Former Pakistan left-arm pacer Mohammad Amir had quashed talks about a possible return to Test cricket, saying that he is currently enjoying playing the red-ball game for Gloucestershire in the ongoing County Championship. 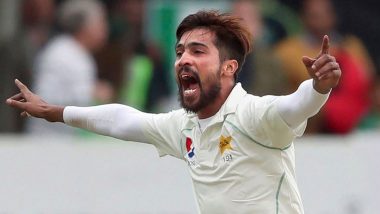 Southampton, May 6 Former Pakistan left-arm pacer Mohammad Amir had quashed talks about a possible return to Test cricket, saying that he is currently enjoying playing the red-ball game for Gloucestershire in the ongoing County Championship. Amir last played Test cricket for Pakistan against South Africa in January 2019 before retiring from international cricket at just 28. But with his fellow countrymate Naseem Shah out with a shoulder injury, Amir joined Gloucestershire and made his return to first-class cricket after two and a half years, going wicketless while conceding 80 runs in 28 overs against Surrey before picking 3/57 in 21 overs in an ongoing County match against Hampshire. Brendon McCullum, Gary Kirsten Emerge Possible Candidates As England Consider Split Coaching: Reports.

"It is too early to talk about a Test return. You never know and things can be changed but for now I'm enjoying playing for Gloucestershire. I am playing after three years so it isn't easy as a fast bowler," Amir was quoted as saying by ESPNCricinfo. "I didn't play any first-class cricket in the last four years but I am getting better after the first game and just trying to help the boys and do well for them. As a bowler it is my duty to bowl well and lead from the front, so that is what I'm trying to do," added Amir, who played 36 Tests for Pakistan. Since his international retirement, Amir has focused on being a globetrotter cricketer plying his trade in various T20 leagues around the world, barring the Indian Premier League (IPL). India Could Have Declared After Sachin Tendulkar's 200, Says Yuvraj Singh on Rahul Dravid's Multan Test Declaration.

Asked about how he got into the red-ball deal with Gloucestershire, Amir explained, "After recovering from the side strain in the PSL, I was training and feeling so good and thought why not give a chance to red-ball cricket. I think I am getting better and on the right path now. I am enjoying red-ball cricket. For now I'm only here for three games and afterwards I'm planning on going to the CPL."

(The above story first appeared on LatestLY on May 06, 2022 05:38 PM IST. For more news and updates on politics, world, sports, entertainment and lifestyle, log on to our website latestly.com).