Former India all-rounder Yuvraj Singh feels that the side could have declared in the Multan Test against Pakistan after legendary batter Sachin Tendulkar had completed his double hundred. On March 29, 2004, during the second day of the Test, Virender Sehwag became the first Indian to score a triple-century in Test cricket with a blistering knock of 309. 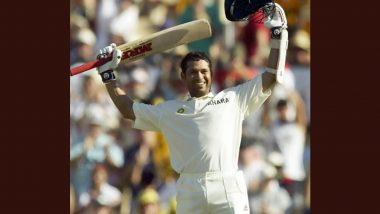 Mumbai, May 6: Former India all-rounder Yuvraj Singh feels that the side could have declared in the Multan Test against Pakistan after legendary batter Sachin Tendulkar had completed his double hundred. On March 29, 2004, during the second day of the Test, Virender Sehwag became the first Indian to score a triple-century in Test cricket with a blistering knock of 309. But what became a huge talking point was stand-in skipper and current India head coach Rahul Dravid opting to declare the first innings at 675/5 in 161.5 overs. The declaration meant that Tendulkar was stranded at 194, falling six runs short of his double century. The mention of the declaration while approaching a landmark was extensively written by Tendulkar in his autobiography 'Playing It My Way'. PBKS vs RR Preview: Likely Playing XIs, Key Battles, Head to Head and Other Things You Need To Know About TATA IPL 2022 Match 52.

"We got a message in between that we had to play fast, and we were going to declare. He could have got those six runs in another over and we bowled 8-10 overs after that. I do not think another two overs would have made a difference to the Test match. "If it was the third or the fourth day, you have to put the team first and they would have declared when you were at 150. There is a difference of opinion. I think the team could have declared after his 200," said Yuvraj in the second part of his interview on 'Home of Heroes' show on Sports18.

Yuvraj, who was the last man out for 59 in that match, went on to score a century in the next Test at Lahore. But his red-ball career never touched the glorious heights of his white-ball journey, making 1900 runs in 40 Tests at an average of 33.92. Yuvraj feels getting a consistent run in a Test side full of stalwarts was made hard with him not getting a fixed spot in the eleven. "If you compare that era to today's era, you can see players getting 10-15 matches. You look at that era, you could open like the way Viru (Sehwag) started it. After that Dravid, Sachin, Ganguly, and Laxman. I got a hundred in Lahore and in the next Test I was told to open." GT vs MI, IPL 2022 Live Cricket Streaming: Watch Free Telecast of Gujarat Titans vs Mumbai Indians on Star Sports and Disney+ Hotstar Online.

Yuvraj, who retired from international cricket in 2019, felt that it wasn't in his destiny to play 100 Tests for India. "Eventually, when I got opportunities to play Test cricket after Dada's retirement, I got diagnosed with cancer. It has just been bad luck. I tried 24x7. I wanted to play 100 Test matches, face those fast bowlers, and bat for two days. I gave it everything, but it was not meant to be."

(The above story first appeared on LatestLY on May 06, 2022 04:00 PM IST. For more news and updates on politics, world, sports, entertainment and lifestyle, log on to our website latestly.com).