MS Dhoni and Co Are Back! CSK Fans Hopeful of Playoffs Qualification After 20-Run Win Against SRH in IPL 2020

Chasing the target, Sunrisers Hyderabad lost skipper David Warner for cheap and Manish Pandey soon followed. No SRH batsmen apart from Kane Williamson were able to give a good account for themselves as yet another middle-order failure proved to be disastrous for the 2016 champions. 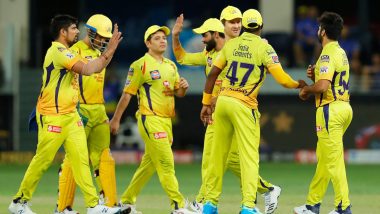 Chennai Super Kings got back to winning ways as they defeated Sunrisers Hyderabad by 20 runs in match 29 of the Indian Premier League 2020 at the Dubai International Crickets Stadium on October 13, 2020 (Tuesday). Kane Williamson fought brilliantly but wasn’t able to get his team over the line as they succumbed to a second consecutive defeat. CSK have recorded their third victory in eight games. SRH vs CSK Highlights of IPL 2020: Chennai Super Kings Defeat Sunrisers Hyderabad by 20 Runs.

Electing to bat first, Chennai Super Kings were off to a poor start as they lost both their openers early, however, an 81-run stand from Shane Watson and Ambati Rayudu steadied the innings. Then quick cameos from Ravindra Jadeja and MS Dhoni at the back end of the CSK innings took them to a par score of 167/6 in 20 overs. MS Dhoni Turns Back Time, Smashes 102 Metre Six During SRH vs CSK IPL 2020 Clash (Watch Video).

Chasing the target, Sunrisers Hyderabad lost skipper David Warner for cheap and Manish Pandey soon followed. No SRH batsmen apart from Kane Williamson were able to give a good account for themselves as yet another middle-order failure proved to be disastrous for the 2016 champions. Fans were happy with a complete display from CSK and praised the team on social media.

A much needed win for #CSK Their comeback is onnnn. #IPL2020 #CSKvsSRH #IPL

Back in the Race

With this win, #WhistlePodu is back in the Play-offs race as well as in the tournament.💪#CSKvsSRH #SRHvCSK #IPL2020

A vintage CSK Thriller. Finding Pinch hitter Sam Curran is the biggest takeaway from this game.

The win moves Chennai Super Kings to sixth in the points table and level on points with tonight’s opponents Sunrisers Hyderabad. The MS Dhoni-led side next face Delhi Capitals on October 17 and will look to continue this run while SRH would be eager to bounce back against Kolkata Knight Riders a day later.

(The above story first appeared on LatestLY on Oct 13, 2020 11:35 PM IST. For more news and updates on politics, world, sports, entertainment and lifestyle, log on to our website latestly.com).