Pakistan will now be looking to capitalise on Bangladesh's low first innings total on a pitch that provides a lot of assistance to the batsmen. Only Mohammad Mithun managed to cross 50 and Bangladesh's highest partnership was 59 for the third wicket between Mominul Haque and Najmul Hossain Shanto. 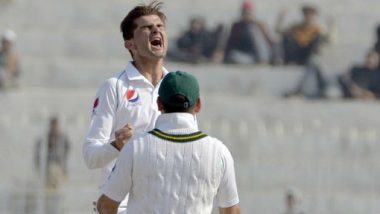 Rawalpindi, February 7: Bangladesh were all out for 233 on Day 1 of their first Test against Pakistan in Rawalpindi on Friday. The hosts pierced into the visitors' top order through pacers Shaheen Afridi and Mohammad Abbas. Afridi ended the day with four wickets to his name.

Pakistan will now be looking to capitalise on Bangladesh's low first innings total on a pitch that provides a lot of assistance to the batsmen. Only Mohammad Mithun managed to cross 50 and Bangladesh's highest partnership was 59 for the third wicket between Mominul Haque and Najmul Hossain Shanto. Pakistan Vs Bangladesh, Cricket Score 1st Test Match.

Afridi struck in the very first over of the day, dismissing the highly rated debutant Saif Hassan for a duck. Tamim Iqbal, playing his first Test since March 2019, followed in the next over after being trapped in front of off stump.

Mominul and Najmul then went about trying to rebuild the Bangladesh innings. A few overs before lunch however, Mominul got an edge off Afridi and was caught by wicketkeeper Mohammad Rizwan. Najmul and Mahmudullah then saw Bangladesh through to end of the session.

They started on 95/3 after Lunch and just as in the first session, Bangladesh lost a wicket in the first over. Najmul edged the ball off Abbas which flew straight into the wicketkeeper's gloves.

Mahmudullah was then dismissed off Afridi thanks to a screamer from Asad Shafiq at second slip after which came Bangladesh's second highest partnership of the innings as Mithun and Liton Das put up 54 runs for the sixth wicket.

Liton fell on 33 to Haris Sohail, although the umpire had initially turned down the LBW appeal with the only question being whether the ball had pitched in line with the stumps. Pakistan reviewed the call and replays showed that it had indeed pitched in line.

This was followed by Bangladesh's third 50-plus stand, this time between Mithun and Taijul Islam, who saw them through to tea. Taijul fell in the third session to Harris looking to heave the ball over the ropes. Yasir Shah ran back from mid-off and took a sharp catch. Bangladesh folded in the next four overs with Mithun being dismissed on 63.

(The above story first appeared on LatestLY on Feb 07, 2020 07:45 PM IST. For more news and updates on politics, world, sports, entertainment and lifestyle, log on to our website latestly.com).