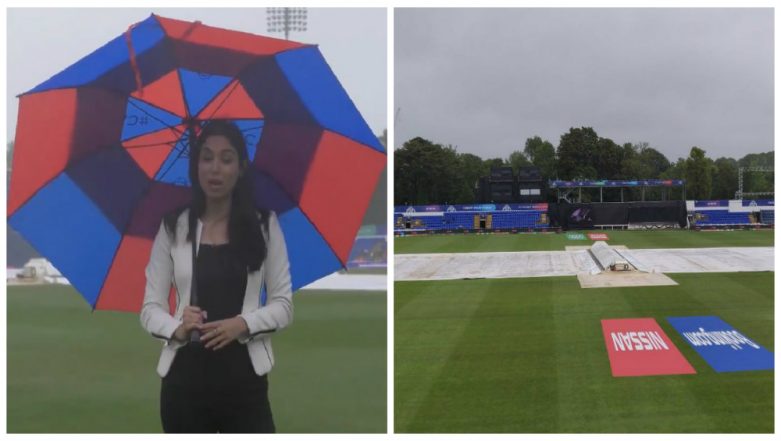 What promised to be a Super Sunday for Cricket fans, turned out to be a dud day as rain played the role of a spoiler to the hilt in ICC Cricket World Cup 2019 warm-up matches. Both Pakistan vs Bangladesh (Cardiff) and South Africa vs West Indies (Bristol) CWC 2019 practice games had to be abandoned due to rain. It is only natural that fans are blaming England weather for the lack of a game in Pakistan vs Bangladesh contest. But trust Twitter users to come up with strange reasons for any phenomena and this time fans are talking about Zainab Abbas- the popular Pakistani TV presenter. Pakistan vs Bangladesh ICC Cricket World Cup 2019 Warm-Up Match Abandoned Due to Rain.

Just to give a quick recap, only 12.4 overs of action was possible in the South Africa vs West Indies match, and not a single bowl could be bowled as the rains didn't even allow the Pakistan and Bangladesh Cricket team skippers to come out for the toss. And while fans kept waiting and praying for the rains to subside so that the Pakistan vs Bangladesh warm-up match could take place, the match had to be called-off as it kept pouring non-stop in Cardiff. South Africa vs West Indies ICC Cricket World Cup 2019 Warm-Up Match Abandoned Due to Rain.

Read the Tweets Below:

This Fan Has Questions For the ICC

The ICC also has knows about the England conditions, is there a rainy rain, then why such a big mega event was made in England.#PAKvBAN #CricketWorldCup2019 https://t.co/Mbo33ASHGx

However, Some Fans Also Thanked the Rain for Saving Pakistan From Another Loss (Pakistan Have Lost 11 Consecutive ODIs)

Thanks rain for saving Pakistan from another Humiliating loss.#PAKvBAN #CWC19

#PAKvBAN Pakistan's world cup warm up campaign ended in a washout. And the problem and a dilemma is that I'm happy as a Pakistani supporter. I'm happy that Pakistan didn't lose to Bangladesh in this game which was very probable.

Zainab Had Herself Tweeted an Image of the Sophia Garden, Cardiff Wicket With Covers to Protect the Pitch

She Had Even Presented the Weather Report

For those not in the know, Zainab Abbas is a celebrity reporter, writer and presenter from Pakistan. She is known for her interviews with contemporary cricketers of the Pakistan National Cricket team. Zainab has more than a million followers on Twitter and commands a strong fan-base. However, Pakistani team's leading batting talent Babar Azam had criticised the star reporter in a tweet last year for a comment she had made on the batsman on social media platform. But Zainab Abbas remains one of the most popular personalities to cover cricket in Pakistan and her random posts featuring cricketers are much talked about and widely discussed on social media platforms.