Parthiv Patel revealed that he mocked Matthew Hayden after the latter was dismissed. The Aussie opener was left furious by Patel’s act and he warned the young Indian cricketer to not replicate his actions or he will get a punch in face. 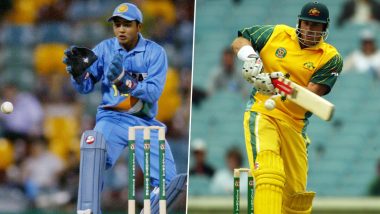 From the infamous monkey gate scandal to Mitchell Johnson and Virat Kohli’s mini-battle, there are numerous stories of on-field spat from Australia vs India matches and now, Parthiv Patel has added one more in the cabinet. The wicket-keeper batsman recalled an incident from the final ODI of India’s 2004 Tour of Australia which was played at Brisbane. The southpaw revealed that he mocked Matthew Hayden after the latter was dismissed. The Aussie opener was left furious by Patel’s act and he warned the young Indian cricketer to not replicate his actions or he will get a punch in face. When Parthiv Patel Sledged Steve Waugh’s Son Austin Using Australian Cricketer's Famous Line.

I was carrying drinks in Brisbane, it was the match in which Irfan Pathan got him out. He had already scored a hundred, and it was a crucial stage when Irfan got him out. And I was just passing him by and I did a “hoo hoo” to him,” Parthiv recalled during an interaction with Fever Network’s 100 hours 100 stars.

Parthiv further told that he met Hayden in the way of the Indian dressing room where the opener was waiting for him. The 35-year-old even went on to say that Hayden warned him to not mock him again or he will punch him in the face.

“He got so angry at me. He was standing at the Brisbane dressing room which is like a tunnel. He was standing there, and he said ‘if you do this again, I will punch your face’. I said ‘sorry’, I stood around and he went off,” Patel added.

Interestingly, Hayden and Patel became teammates four years later while opening the batting for Chennai Super Kings (CSK) in IPL 2008. The Gujarat-born cricketer said that he became Hayden’s friend during the IPL and the latter also invited him to have dinner in his home.

“Yeah, Hayden wanted to beat me up in Brisbane. But we became good friends after that. We played a lot of cricket together at CSK. We enjoyed each other’s company. Opening the batting was fun with him. We’ve had good times off the field as well. So we patched up after that Brisbane incident. Even after the IPL finished, I went to Australia with an emerging side. Hayden called me home, prepared chicken biryani and dal for me,” said Patel.

Talking about the Brisbane ODI, the home side were chasing 304 runs to win the game. They started off well. However, the Indian bowlers made a comeback in the game and guided their side to a 19-run win. VVS Laxman, who scored a brilliant century in the first innings, was adjudged the Man of the Match.

(The above story first appeared on LatestLY on May 06, 2020 06:10 PM IST. For more news and updates on politics, world, sports, entertainment and lifestyle, log on to our website latestly.com).