Rashid Khan, Afghanistan Spinner, Has Got All the Tricks in His Bag, Says Brett Lee 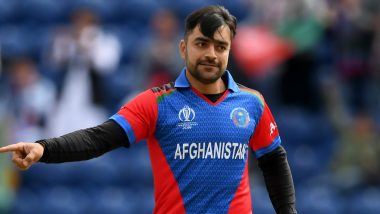 Mumbai, August 12: Former Australian pacer Brett Lee feels Afghanistan leg-spinner Rashid Khan will be the one to look out for in this year's edition of the Caribbean Premier League (CPL) which starts from August 18. CPL will be the first major T20 league to begin during the ongoing health crisis caused by the COVID-19 pandemic. The 33-match tournament will be played in Trinidad & Tobago with all the matches being held across two stadiums.

"I'm going to go with Rashid Khan. He's got all the tricks in his bag - a beautiful 'wrong un, great temperament and I think these wickets will definitely suit him, playing in the UAE," Lee said while speaking on Star Sports show Cricket Connected. Rashid Khan Hat-Trick Video: Afghanistan Spinner Takes Three Wickets in Three Balls for Adelaide Strikers vs Sydney Sixers in BBL 2019-20.

"He knows that country back to front, he has played a lot of cricket there. I think he will really do well over there. He's a wonderful guy as well, so Rashid Khan's my pick."

Former India batsman Sanjay Manjrekar picked Chris Lynn as his man in the CPL. "But I like Chris Lynn, you know. There's a kind of a sledgehammer kind of power that he has in his batting."

"This time round, actually, CSK may not play Imran Tahir as much because you know, you can only play so many foreigners. Now, they have got Piyush Chawla. Imran Tahir might just sit out. So, my pick will be Chris Lynn."

Rashid's story in international cricket is nothing short of a fairy tale. One of the most prolific leg-spinners in the world, the 21-year-old was snapped by defending champions Barbados Tridents for the eighth edition and will be among the star attractions in the league.

Rashid, who made his international debut in 2015, has been an integral part of the Sunrisers Hyderabad squad in the Indian Premier League (IPL). Returning to competitive action due to the COVID-19 pandemic, the lethal Afghan leggie, who also has the knack of stemming the run flow at any given point of time, can use his time in the Caribbean to get back his rhythm and pocket a few wickets under his belt which will be vital to raise his confidence when he boards the flight to UAE for the 13th IPL edition.

Lynn, on the other hand, has been a lethal exponent in T20 leagues across the world. The 30-year-old, who will ply his trade for St Kitts & Nevis Patriots, is expected to unleash a flurry of wild shots in the tournament, a nightmare for any bowling attack.

After being released by Kolkata Knight Riders (KKR), Lynn was picked up by defending champions Mumbai Indians for his base price of Rs 2 crore for this year's IPL edition slated to start from September 19. The CPL matches will be broadcast live from 7 pm on Star Sports network.

(The above story first appeared on LatestLY on Aug 12, 2020 11:27 PM IST. For more news and updates on politics, world, sports, entertainment and lifestyle, log on to our website latestly.com).