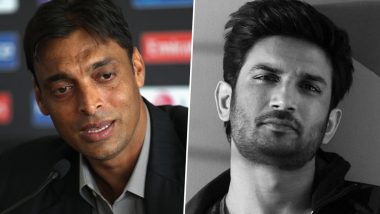 The death of Bollywood star Sushant Singh Rajput by suicide came as a shocker for many fans all around the world. Along with Bollywood fans, cricket lovers were also saddened by the tragedy as the late actor played the lead in MS Dhoni’s biopic. The likes of Virat Kohli, Rohit Sharma and Yuvraj Singh mourned the demise of Rajput and also offered condolences to his family. In a recent interaction, former Pakistan speedster Shoaib Akhtar recalled his first meeting with Sushant and said that he regrets not talking to him at that point of time. Akhtar said that he could have shared his life experiences with the actor but he didn’t. Mohammad Hafeez Should Have Confronted PCB if He Got His Second COVID-19 Report as Negative, Says Shoaib Akhtar.

“I met him in Mumbai when I was about to leave India in 2016. To be honest, he did not look very confident to me. He went past me with his head down. A friend told me that he is doing MS Dhoni’s film,” said Akhtar in a YouTube video.

“I thought I will have to watch his acting now. He has come from a humble background and he is making a good film. The film did turn out to be successful but I regret not stopping him there and having a word with him about life. I could have shared experiences of my life with him, maybe I could have talked to him like the way I do which could have given him a broad spectrum in life. But I regret not talking to him,” he added. Sushant Singh Rajput Dies: David Warner, Yuvraj Singh, Kamran Akmal and Others Mourn the Death of Bollywood Star.

Citing the example of his career, Akhtar also shed lights on challenges a newcomer faces in his early days. “When I came into the side there was Wasim Akram and Waqar Younis who were like Salman Khan and Shah Rukh only… So I had to really put in the hard yards to make a name for myself,” Akhtar added.

(The above story first appeared on LatestLY on Jun 28, 2020 06:08 PM IST. For more news and updates on politics, world, sports, entertainment and lifestyle, log on to our website latestly.com).