Shreyas Iyer vs Ish Sodhi, Martin Guptill vs Jasprit Bumrah and Other Exciting Mini Battles to Watch Out for During India vs New Zealand 3rd T20I 2020 in Hamilton 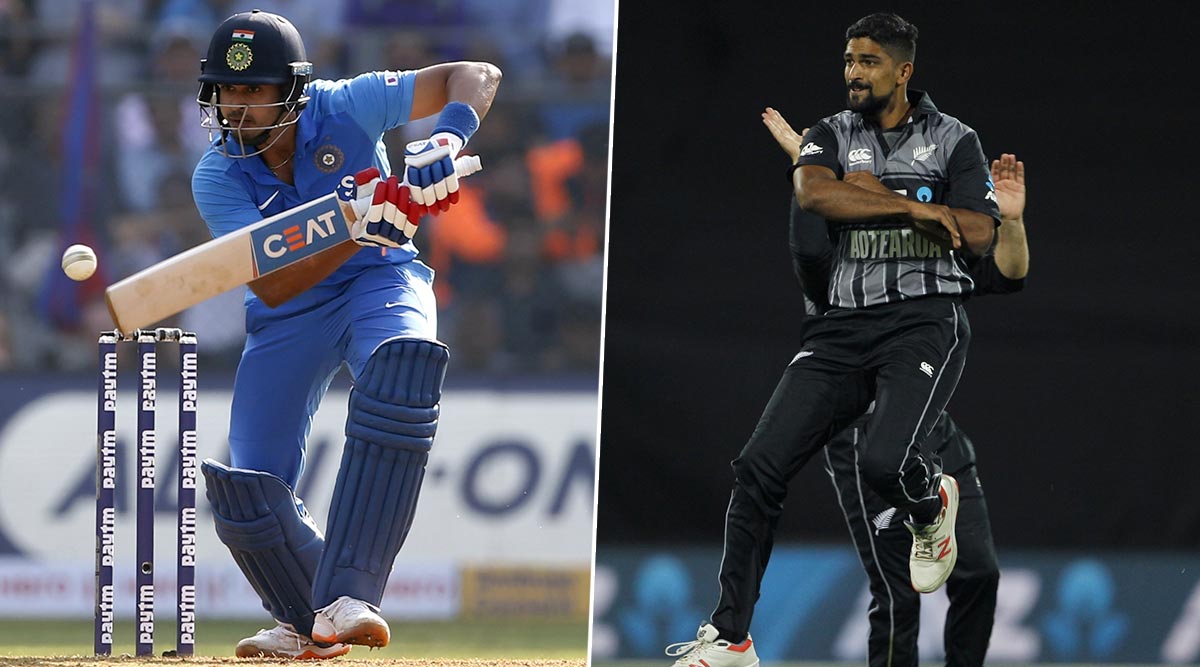 India will chase its first T20I series win on New Zealand soil when they take on the hosts in the third T20I of a five-match series at Hamilton. India leaned on KL Rahul and Shreyas Iyer’s power-packed batting and Jasprit Bumrah’s miser bowling to beat New Zealand in the opening two T20I matches and will hope to repeat the same when both teams face-off again in the 3rd T20I match. New Zealand, on the other, will hope to halt the dry run and bounce back in the T20I series to end their home summer on high. While their bowling has certainly been off-colour, New Zealand’s batsmen have got starts but have failed to capitalise. Take a look at some mini-battles that will be at play in India vs New Zealand 3rd T20I encounter. New Zealand Vs India, Cricket Score 3rd T20I Match.

New Zealand opening duo Martin Guptill and Colin Munro have started well but have failed to go big. Munro scored a fine half-century in the 1st T20I match but failed to bat the ball in the 2nd while Guptill has played short cameos in both the Twenty20 internationals before getting out chasing a biggie. Among the others, Kane Williamson and Ross Taylor are experienced and must shoulder New Zealand’s series fightback while Tim Seifert showed glimpses of a good finisher. Colin de Grandhomme has, however, been the biggest department for the hosts. Coming in at 4, Grandhomme has been dismissed by Ravindra Jadeja in both the innings and have failed to last more than five deliveries. Virat Kohli May Become First Batsman to Score 3000 T20I Runs, Could Achieve Feat In Ongoing IND vs NZ Series.

In a series, where most bowlers have come under the pump Jasprit Bumrah has been a standout. His records after two T20I matches in the series reads – eight overs, two fours, one six and 52 runs conceded. This involves a game where both teams smashed over 200 runs and bowlers went over a run-rate of 8 and that’s why Bumrah has been the difference among both teams. His tight length and ability to restrict the opposition have awarded wickets to the other bowlers. Guptill, forced to contain himself against Bumrah, went big against the other bowlers and lost his wicket in both the matches. Jasprit Bumrah One of Best Death Bowlers, Says Martin Guptill After New Zealand’s 2nd T20I Defeat.

Ravindra Jadeja dismissed Colin de Grandhomme in both the opening two T20I matches. Such has been Jadeja’s dominance over Grandhomme that the hard-hitting New Zealand all-rounder have failed to last even an over against Jadeja despite being promoted up the order in both the matches. Grandhomme though has the ability to change matches on his own and will hope to repay the management’s faith with a big innings in the 3rd ODI match. He has been out on single digits in his last four T20I matches but has hit at least a half-century in each of the last three T20I series for New Zealand.

Iyer have run havoc in both the opening T20I matches with successive power-packed innings while Ish Sodhi have struggled to hit the right lengths and have conceded over 30 runs on both the first two matches. But in the 2nd T20I match, Sodhi showed more composure with his clever usage of the flighter and leg spinners. Sodhi even removed Iyer although that served more as a consolation than a prized scalp. With Iyer sealing his place in the Indian team and Sodhi’s place coming under the threat, this could be a mini-battle to watch out for.

A win at Hamilton on January 29, 2020 (Wednesday) could make Virat Kohli and his team the first Indian side to clinch a T20I series win in New Zealand. India already lead the five-match T20I series 2-0 having come to New Zealand on the back of successive T20I series victories over Bangladesh and Sri Lanka. For New Zealand, it is a matter of face-saving at home before thinking of levelling the series.