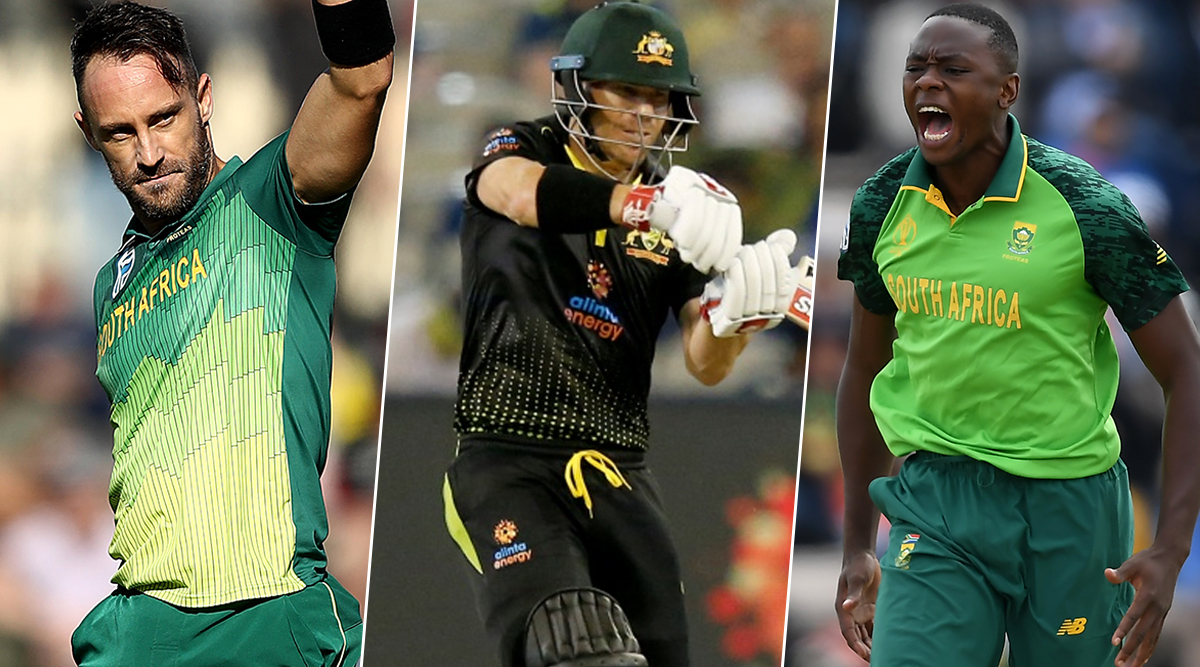 After facing a 2-1 loss against England, South Africa’s next T20I assignment is against Australia. The three-match series will get underway on February 21 at the Wanderers Stadium in Johannesburg. Both the teams have played some great quality of T20 cricket in recent times and thus, one can expect the upcoming series to be a nail-biter. Also, the ICC T20 World Cup 2020 is scheduled to be played this year only. So, both the sides will be aiming to strengthen their bench strength. There are many players in both teams who can turn the match on its head and below, we’ll look at some such key players.  South Africa Vs Australia, Cricket Score 1st T20I Match.

Australia’s T20I series came against Pakistan at home in which they were dominant throughout the series and hence, clinched the three-match affair 2-0 with one game being washed out due to rain. David Warner, Steve Smith and Pat Cummins have been the consistent performers for the Aussies. South Africa vs Australia Dream11 Team Prediction.

On the other hand, Quinton de Kock and Co’s last T20I series against England didn’t result in their favour. However, they fought neck to neck against the might English side as all the three games were cliff hangers. Meanwhile, let’s look at the key players for SA vs AUS series.

The newly appointed Proteas captain is certainly enjoying the form of his life as has been piling runs consistently at the top and will eye to extend his purple patch in the forthcoming series too. However, he will have to tackle the likes of Pat Cummins and Mitchell Starc and let’s see if he can rise up to the occasion or not.

The pocket-sized dynamo might be thinking about bidding adieu to the shortest international format. However, the southpaw has been in great form in white-ball cricket and the home team must vary him. Also, Warner has a great record against South Africa and will be aiming to leave a mark in the series.

After stepping down as the captain, Du Plessis will step into the series without any additional pressure and will be eyeing to muster some big scores. The 35-year old is also making a comeback in white-ball cricket and will aim to get back to his vintage best.

Another comeback man for South Africa in the series is Kagiso Rabada. Regarded as one of the best pacers in the modern era, the speedster has everything which one requires to excel in the shortest format. However, he will have the onus of containing players like David Warner and Aaron Finch and let’s see what he has to offer.

Rabada’s counterpart in this series will be Australia’s pace spearhead Mitchell Starc. The left-arm pacer might not have enjoyed the best of outings against India in the ODI series. However, Starc still possesses the quality of rattling any batting line-up and taking him lightly can cost South Africa in a big way. Also, the tracks in the rainbow nation are ideal for him and the bowler will want to make full use of it.

With Australia being filled with star players, one might tout them as favourites to win the series. However,  they are playing in South Africa’s den and defeating Quinton de Kock and Co will take some beating. Also, the home side has shown good form in recent times and will eye to thrash the Aussies.