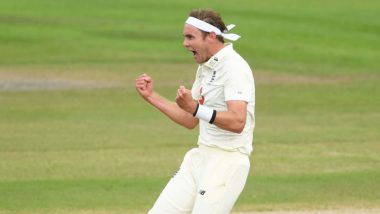 London, July 30: Former England captain Alastair Cook feels Stuart Broad had proved his critics wrong and continued to deliver in crunch situations for the country in red-ball cricket. Veteran pacer Broad finished the third Test between England and West Indies with a a match haul of 10 for 67 during which he touched the milestone of 500 Test wickets. Broad is just the seventh bowler -- and second Englishman after James Anderson -- to go past 500 Test wickets.

"We've always been lucky to have Stuart and Jimmy (James Anderson), but Stuart the last couple of years has just shown his character," Cook told Sky Sports News. "People have been writing him off actually. You think a couple of years ago, 'when's he finishing, when's he finishing?' And he's gone away from the spotlight, changes his run up, worked on his game and as a 34-year-old you can't ask for any more than that. Hard for Stuart Broad, James Anderson to Play Together in Australia, Feels Peter Siddle.

"He's just delivering goods time after time. This year I think he's taken 80 odd wickets since the Ashes at 20, and that's a huge credit to Stuart. "And the one thing I'll say about Stuart, it must be a great feeling for him that he can lie in bed at night and know that when it gets tough, he delivers for England -- and in pressure situations.

"Look how many times he's bowled a match-winning spell in an Ashes series, or a big series or when the game's in the balance. You can't say anything better than that as a player, that he delivers when it's most important," said Cook who stood down as England Test captain in 2017 after a record 59 matches as skipper. England won the Test series 2-1 riding on Broad's heroics in the final two Tests after he was surprisingly dropped from the first match which England lost.

(The above story first appeared on LatestLY on Jul 30, 2020 08:41 PM IST. For more news and updates on politics, world, sports, entertainment and lifestyle, log on to our website latestly.com).