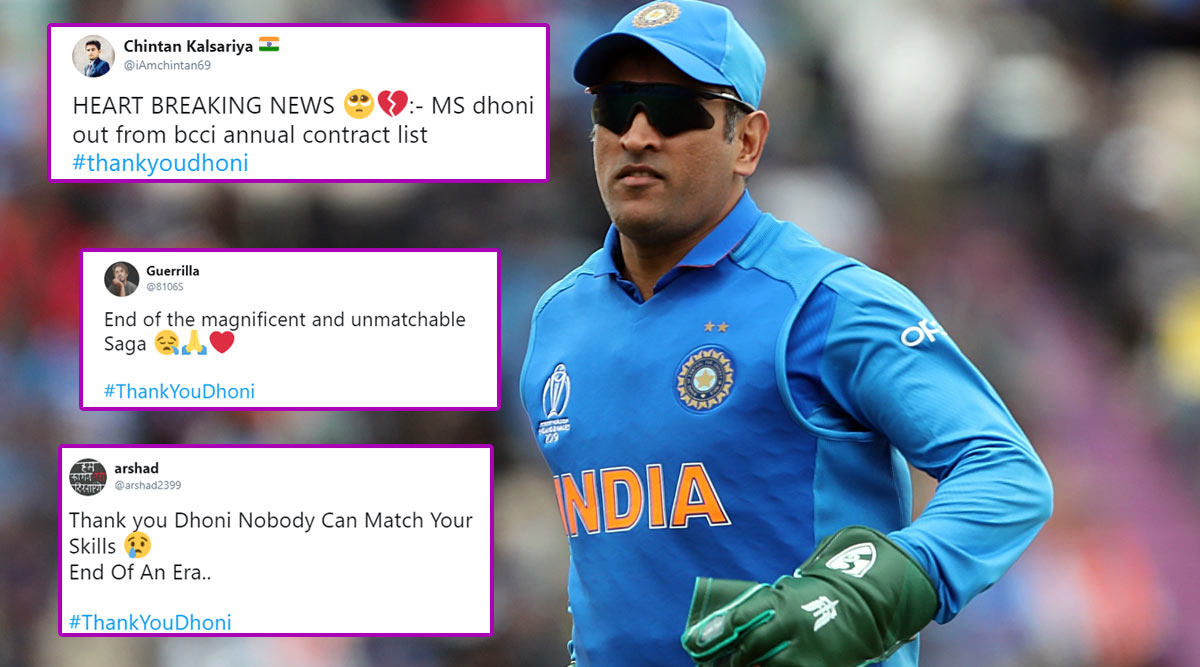 Former Indian captain MS Dhoni has been excluded from the latest annual player contract and Twitterati has gone berserk with the news. The wicket-keeper batsman has not played a single cricket match since the 2019 World Cup and speculations were that the legendary cricketer might hang up his boots. However, there has been no official confirmation about the news but Dhoni’s omission from the recently announced contract by Board of Control for Cricket in India (BCCI) has made the fans sure that the Ranchi-born cricketer has already played his last international match. MS Dhoni Left Out of BCCI's Annual Players Contract List Amid Retirement Rumours.

#ThankYouDhoni became the top trend in Twitter and his lovers started paying tribute to him on the micro-blogging website. Some thanked him for his prolific contribution towards Indian cricket while several also expressed the desire of seeing more of Dhoni. Well, the wicket-keeper’s performance in the international arena is certainly sensational and has made a lot of fans over the years. The 38-year old cricketer is likely to lead Chennai Super Kings (CSK) in the 2020 edition of the Indian Premier League (IPL) and one thing is sure, fans will turn up in large numbers to watch their favourite hero. Meanwhile, let’s look at how fans got emotional on Dhoni’s omission from the contract. BCCI Announces Annual Player Retainership 2019-20, Check Full List of Players Awarded Contract.

So his career ended the same way it started. Poetic.

Set one game in Ranchi or in Vizag, where he made 145 to become International Star as his last ODI and send him off #ThankYouDhoni 😔😔😓

Thank you Dhoni Nobody Can Match Your Skills 😢

Who can Forget That Hit?

You can't even expect this type of end 😭💔#ThankYouDhoni pic.twitter.com/qUr4MxDKAi

Making his debut on December 2004, Dhoni is arguably the best wicket-keeper batsman to have graced the game. Be it executing jaw-dropping dismissals behind the stumps or playing scintillating knocks in front of it, the cricketer has already given many memorable moments to the Indian cricket fans. Moreover, he has proved his mettle as a fantastic leader too. In fact, Dhoni is the only captain to win 50-over World Cup, 20-over World Cup and Champions Trophy. Well, these numbers are certainly jaw-dropping and it will be interesting to see whether the fans will more of his heroics or not.