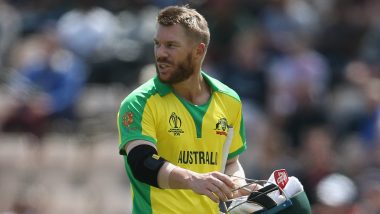 New Delhi, June 22: The India-Australia Test series Down Under is expected to be a thriller especially keeping in mind the fact that coronavirus pandemic has seen sports going into hibernation in the last few months. And Australia opener David Warner believes that it will be interesting to see Virat Kohli and Steve Smith clash over four Test matches. But went on to add that it was more about the two teams battling it out.

"In comparison with him [Kohli] and Smith, they are obviously two of the best batters in the world across all three formats. It is going to be a great battle between them if that's what people are anticipating," David Warner said on India Today show Inspiration. David Warner Mentions Virat Kohli After Winning Allan Border Medal, Steve Smith Gives Priceless Reaction (Watch Video).

"For us, it's about Australia vs India, we don't look at individual battles. If it's individual, it's bowler vs batter. At the end of the day, we have to do our research well. We know our line and lengths to bowl in Australia. Use our conditions right. Hopefully, the contest is great between bat and ball and great spirit of cricket battle as well."

Earlier Smith had spoken about how the relation between him and Kohli has developed in the last few months.

"I had few conversations with him (Virat) off the field, few messages here and there in recent times just to see how things are going in India. He is a terrific guy and we both play hard out on the field and play as well for our respective teams and its part of the game.

"Virat's gesture in the World Cup to the Indian fans that were giving me and David Warner little bit of a stick, I appreciated that and I share that with him straight up. He is a terrific guy and the way he has lead the Indian Team has been amazing, they are amazing side and can't wait to play them when they come out to Australia this year will be something incredibly special," he had said on Cricket Connected.

Talking about Kohli's ability to chase down games, Smith had earlier told IANS: "Yeah, he is terrific. His batting numbers just speak for themselves. I think he's an incredible player in all three formats and I think we will see him break many records. He's already broken plenty of them and I see him breaking many more over the years. He has got the hunger for runs and doesn't stop getting them. Hopefully, he can stop getting them against Australia, that'll be nice."

(The above story first appeared on LatestLY on Jun 22, 2020 04:37 PM IST. For more news and updates on politics, world, sports, entertainment and lifestyle, log on to our website latestly.com).