Virat Kohli Does A Thanos Snap in This Avengers: Endgame-Inspired Ad And Here's What Happens; Watch Video 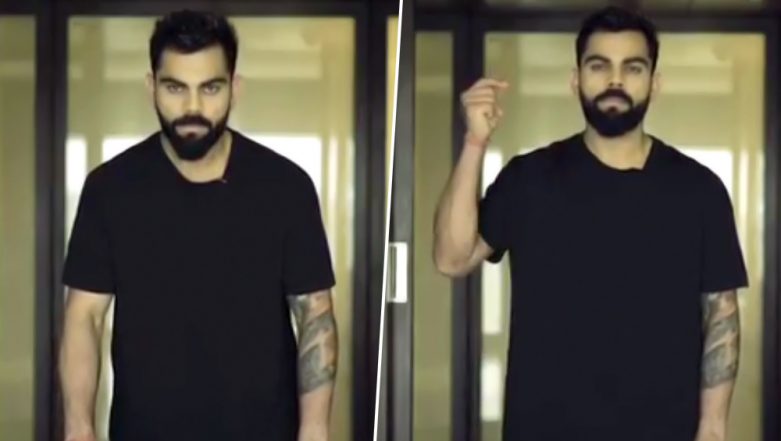 Royal Challengers Bangalore (RCB) skipper Virat Kohli spirit seems to be finally on the higher side after his team has started to perform decently in the on-going IPL tournament. He recently does a Thanos snap in this Avengers: Endgame-inspired advertisement which is worth watching. Virat Kohli is Wisden’s Leading Cricketer in the World for the Third Consecutive Year, Smriti Mandhana Wins Women’s Award.

RCB has won their last four matches in a row in IPL 2019 after facing 6 defeats consecutively. Bangalore won their last game against Kings XI Punjab by 17 runs after posting a total of 202 runs. Virat Kohli also scored a century in this season against Kolkata Knight Riders (KKR) which RCB won by 10 runs. In the below video Virat Kohli can be seen resembling the infinity gauntlet which Thanos has done in Avengers Infinity War. IPL 2019: Virat Kohli Brings Back ‘Mankad’ Memories for R Ashwin in RCB vs KXIP High-Voltage Encounter.

Virat Kohli presenting Avengers in his own style!!!

This snap would probably help the Avengers better. 😄 Presenting the special edition cricket can from #Oceanone8 energy drinks. #one8 #PlayTheDay @oceanbeverages

It is very necessary for Virat Kohli to end the IPL 2019 on a high note before he leads the Indian Cricket team in ICC Cricket World Cup 2019. Meanwhile, RCB has earned 8 points so far and will play their next match against Delhi Capitals (DC) on Sunday, April 28, 2019. Kohli and his men will have to win all their remaining matches to have an outside chance for making it to the playoff.