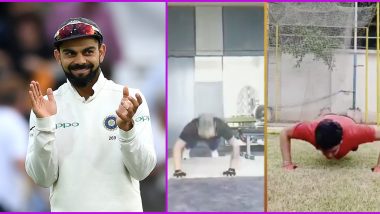 Virat Kohli, apart from his batting skills, is known for his fitness level. The Indian cricket team captain has been instrumental in inducing fitness culture in the dressing room and has been an inspiration for many. Kohli often uploads his workout videos and photos on social media platforms. Recently, the Indian skipper was seen acing all-rounder Hardik Pandya’s ‘flying’ push-ups. Kohli went a step further and modified the exercise by adding a clap to it. The video, apparently, was viral with many trying Kohli’s new workout. Virat Kohli Comes Up With an Extreme Version of Hardik Pandya’s Flying Push-Ups, Indian Skipper Adds Claps to the Drill (Watch Video).

Meanwhile, former Indian cricketer and now, Minister of State (Youth Services and Sports) with the government of West Bengal, Laxmi Ratan Shukla also took the challenge. Shukla, who has represented Kolkata Knight Riders (KKR) in the Indian Premier League (IPL) posted his video of ‘flying’ push-ups with claps on Twitter. Shukla wrote, “I just tried the challenge @imVkohli and could only achieve this keep inspiring all with this level of fitness. Proud of you Captain.” Virat Kohli Gives Fans Major Fitness Goals With Weightlifting Video, AB de Villiers, Harbhajan Singh React.

I just tried the challenge @imVkohli and could only achieve this😀keep inspiring all with this level of fitness.Proud of you Captain🏏💪😊 pic.twitter.com/HJYLZxmzXO

Shukla, who retired from all forms of cricket in 2015, joined politics subsequently. And in 2016 Bengal elections he won from Howrah North for Trinamool Congress (TMC). The all-rounder was one of the well-known names in domestic cricket. He also played three One-Day Internationals for India in 1999.

(The above story first appeared on LatestLY on Jul 04, 2020 02:03 PM IST. For more news and updates on politics, world, sports, entertainment and lifestyle, log on to our website latestly.com).