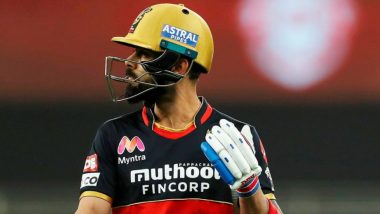 Kohli was guilty of dropping KXIP captain KL Rahul twice in seven deliveries and costing RCB an extra 60 runs. Later with the bat, Kohli was out trying to pull Sheldon Cottrell for just one run from five deliveries. The team India and RCB skipper later apologized for the dropped catches and accepted that those two dropped catches cost the side some valuable extra runs. ‘Suresh Raina Please Comeback’: Fans Troll CSK After Defeat to Delhi Capitals, Request Chinna Thala to Return to UAE and Join Team for IPL 2020.

The RCB skipper, on Saturday, took to Twitter to share a post on unity and called for the side to be united. “Unity is the vehicle, desire is the fuel,” wrote the 31-year-old on his social media pages alongside a picture of the team in a huddle.

Unity is the vehicle, desire is the fuel. pic.twitter.com/DVU32dNrH3

RCB next play Mumbai Indian in IPL 2020 on September 28 (Monday). They are on two points from as many games. Kohli’s side beat SRH by 10 runs in their opening match after successfully defending 163 runs but were beaten by KXIP in their next after failing to chase down 207 runs.

Chasing a massive total, RCB bundled for 109 in 17 overs. Their next opponents, defending champions Mumbai Indians lost to Chennai Super Kings in their opening fixture but came back from the disappointing defeat to beat Kolkata Knight Riders by 49 runs.

(The above story first appeared on LatestLY on Sep 26, 2020 05:45 PM IST. For more news and updates on politics, world, sports, entertainment and lifestyle, log on to our website latestly.com).