Sachin Tendulkar and Roger Federer are two of the biggest names in the sporting world and have also inspired many with their successes. Former Indian all-rounder Yuvraj Singh is indeed one of them as he recently recalled Federer and Tendulkar’s motivational quotes while posting a selfie from his gym session. 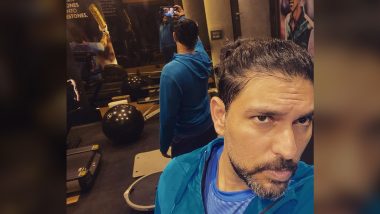 Sachin Tendulkar and Roger Federer are two of the biggest names in the sporting world, and words indeed aren’t enough to describe their prowess. While the former Indian batsman piled up a mountain of runs in international cricket, the latter Swiss maestro is arguably the greatest tennis player ever. The two sporting icons have also inspired many with their successes, and former Indian all-rounder Yuvraj Singh is certainly one of them. The former Indian all-rounder recently recalled Federer and Tendulkar’s motivational quotes while posting a selfie from his gym session. Yuvraj Singh Pokes Fun at Sachin Tendulkar While Sharing Throwback Picture!

“There is no way around hard work !! Embrace it @rogerfederer! When people throw stones at you turn them into milestones!!! @sachintendulkar some great motivating quotes by the greats ! Find what works for you,” wrote the two-time World Cup winner on Instagram. Fans were overwhelmed after coming across the post as the picture garnered a lot of likes and comments. Yuvraj Singh Trolls Shikhar Dhawan for Not Reviewing LBW Call.

Yuvraj – who announced his retirement from international cricket last year – is himself counted as one of the biggest match-winners in World cricket. The southpaw demolished many potent bowling line-ups in his illustrious career while his knack of taking crucial wickets made him even a captain’s delight.

More than his on-field skills, however, it was Yuvraj’s dedication which made him a lethal weapon.  Despite battling with cancer, the all-rounder didn’t just play the 2011 World Cup but also was the chief architect of India’s triumph. He bid farewell to the gentleman’s game in July 2019 but continues to follow the game. While he has praised many players for their impressive performances, the legendary all-rounder doesn’t hold back in criticizing any player or team management’s decision.

(The above story first appeared on LatestLY on Nov 19, 2020 10:41 AM IST. For more news and updates on politics, world, sports, entertainment and lifestyle, log on to our website latestly.com).