Dr. James Naismith’s Original 13 Rules of Basketball, Foundation of FIBA and History of the Game

On January 15, 1892, Dr. James Naismith first published the rules of the game. It was referred to "basket ball" back then and was later changed to basketball. The game has seen some changes since the original first rules were introduced in the Springfield College school newspaper- The Triangle. 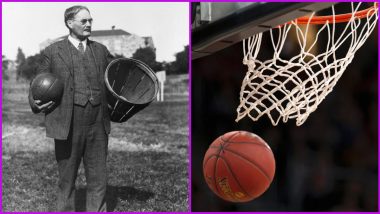 January 15, 1892 is an important date in the history of basketball. On this day in 1892, Dr. James Naismith first published the rules of the game. It was referred to "basket ball" back then and was later changed to basketball. The game has seen some changes since the original first rules were introduced in the Springfield College school newspaper- The Triangle. It was in Massachusetts where Naismith invented the rules of basketball in December, 1891 and then in January, 1982, the rules were first made public via a college newspaper. Dr James Naismith Google Doodle: Inventor of Basketball Gets an Animated Doodle on Game's Birthday.

It was the inability to go out in winter months and play that led to the invention of this indoor sport. Naismith, Canadian-American physical educator, professor, doctor, and coach, was handed the task of creating an indoor game to keep students occupied during the harsh winter months.

On December 21, 1981 Naismith introduced the game to his students. It featured actual baskets made of wooden peach which were nailed to a gymnasium wall. The game initially had nine players per side.

The Original 13 Rules of Basketball by Dr. James Naismith

1. The ball may be thrown in any direction with one or both hands.

2. The ball may be batted in any direction with one or both hands (never with the fist).

3. A player cannot run with the ball. The player must throw it from the spot on which he catches it, allowance to be made for a man who catches the ball when running at a good speed if he tries to stop.

4. The ball must be held in or between the hands; the arms or body must not be used for holding it.

5. No shouldering, holding, pushing, tripping, or striking in any way the person of an opponent shall be allowed; the first infringement of this rule by any player shall count as a foul, the second shall disqualify him until the next goal is made, or, if there was evident intent to injure the person, for the whole of the game, no substitute allowed.

6. A foul is striking at the ball with the fist, violation of Rules 3,4, and such as described in Rule 5.

8. A goal shall be made when the ball is thrown or batted from the grounds into the basket and stays there, providing those defending the goal do not touch or disturb the goal. If the ball rests on the edges, and the opponent moves the basket, it shall count as a goal.

10. The umpire shall be judge of the men and shall note the fouls and notify the referee when three consecutive fouls have been made. He shall have power to disqualify men according to Rule 5.

11. The referee shall be judge of the ball and shall decide when the ball is in play, in bounds, to which side it belongs, and shall keep the time. He shall decide when a goal has been made, and keep account of the goals with any other duties that are usually performed by a referee.

12. The time shall be two 15-minute halves, with five minutes' rest between.

13. The side making the most goals in that time shall be declared the winner. In case of a draw, the game may, by agreement of the captains, be continued until another goal is made.

After the rules were published in January, 1982, in March, the same year, the first public basketball game was played in Springfield, Massachusetts. The game was well-received and became an instant hit. By 1893, basketball spread to other parts of the world through the YMCA (Young Men's Christian Association) movement.

In 1898, the first professional league of basketball was found. However, it was abandoned in 1904. In 1909 the first international match was played between Mayak Saint Petersburg and YMCA American team in Saint Petersburg.

Interestingly, basketball made its debut at the 1904 Olympic Games as a demonstration sport and then became an official event at the 1936 Games in Berlin, Germany.

(The above story first appeared on LatestLY on Jan 15, 2021 08:16 AM IST. For more news and updates on politics, world, sports, entertainment and lifestyle, log on to our website latestly.com).