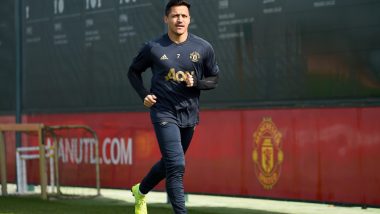 Manchester United outcast Alexis Sanchez who is currently on loan at Inter Milan is expected to return to Old Trafford once his contract expires at the end of this month. According to reports from England, the record English champions, who are paying a portion of the Chilean’s fee, want him back once his loan spell ends on June 30, despite the Italian giants wanting to keep hold of the attacker till the end of the season. Paul Pogba One of the Best Midfielders in World, Says Manchester United Manager Ole Gunnar Solskjaer.

As reported by the Mirror, Manchester United want Alexis Sanchez back at the club once his loan deal at the Italian side expires at the end of the month. Inter, on the other hand, are involved in a title race in Serie A and Antonio Conte would love to have the Chilean at his disposal but it looks highly unlikely. Bruno Fernandes Shares a Post on Social Media After Manchester United Draws 1-1 Match Against Tottenham Hotspur (See Post).

Both Manchester United and Inter Milan are involved on the Europa League which is scheduled to restart in August and it is understood that the Premier League side are not interested in strengthening the squad of a team who could turn out to be their possible rivals in the further stages of the competition.

With the footballing tournaments stretched longer than what was scheduled at the start due to the pandemic, a lot of unrest has been created over the players whose contracts are about to run out by the end of the month.

However, several clubs have extended the deal to see the players stay with them until the conclusion of the season. Chelsea recently announced that Pedro and Willian have agreed on a contract extension and will stay until the end of the current campaign.

(The above story first appeared on LatestLY on Jun 24, 2020 11:14 AM IST. For more news and updates on politics, world, sports, entertainment and lifestyle, log on to our website latestly.com).