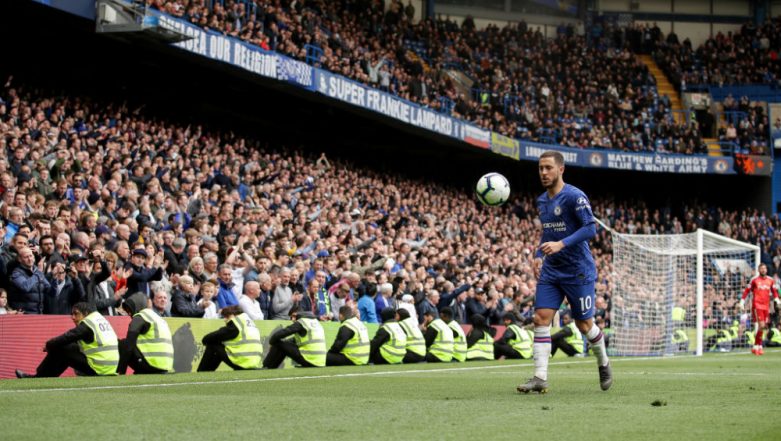 Chelsea are guaranteed Champions League football next season after a home win over Watford. So their Europa League campaigns suddenly turns into an opportunity to win a trophy rather than a necessity for top European football next season. They came away with a 1-1 draw against Eintracht which was a positive result considering the German team had been in fine home form. Maurizio Sarri will be a happy man considering his team have done well in the Europa League without using several of his first-team stars. Check out Chelsea vs Eintracht Frankfurt, UEFA Europa League semifinal live streaming online details. Ajax Players Break Ramadan Fast Mid-Match During Champions League Semi-Final Against Tottenham Spurs, Watch Video.

N’Golo Kante sustained a hamstring injury at the weekend is unavailable for selection tonight. The Frenchman will be replaced by Ross Barkley though he is a different player compared to the World Cup winning Frenchman. Ruben Loftus Cheek and Eden Hazard are unlikely to feature with Mateo Kovacic and Willian coming in. Olivier Giroud is the preferred choice for the striker’s role in Europe and ex-Arsenal man should get the nod ahead of Gonzalo Higuain.

Ante Rebic returns for Eintracht Frankfurt which is a huge boost to the visitors’ attacking play. His arrivals means Mijat Gacinovic drops to the bench. Sebastian Heller is a doubt for the game due to an abdominal strain and a decision on his availability will be taken after carefully assessing his situation. In his absence, Serbian striker Luka Jovic needs to link up well with Filip Kostic in the forward areas. Kevin Trapp in goal can expect a busy day at work with Chelsea in good goalscoring form of late at home. Lucas Moura’s Hat-Trick Against Ajax Takes Tottenham Hotspur to Champions League 2019 Final.

It is going to be another late night match for football fans in India as Chelsea take on Eintracht Frankfurt on May 10, 2019, at 12:30 a.m IST (Thursday midnight). Valencia vs Arsenal  semifinal match will be held at the Stamford Bridge.

With Sony Sports Network as the official broadcaster, their digital platform Sony Liv will be providing the free video streaming. You can catch Chelsea vs Eintracht Frankfurt, UEFA Europa League with free live streaming online on Sony Liv.

This is Eintracht’s first visit to Stamford Bridge and then they will have to show a lot of courage to come away with a win. They may score but the Blues should go through considering the situation they are in.