Cristiano Ronaldo arrived at Turin on Monday ahead of Juventus’ first practice session. 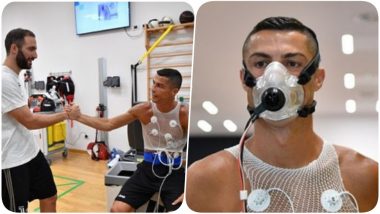 Cristiano Ronaldo arrived at Turin on Monday ahead of Juventus’ first practice session. The former Real Madrid striker was spotted at the airport with his son Mateo. A new set of pictures and videos have cropped up online where Ronaldo was seen meeting his Juventus teammates. This was Ronaldo’s first training session at Juventus after his exit from Real Madrid.

He also underwent a medical test ahead as a part of his training. Ronaldo was seen running on the treadmill and was greeted by Argentine duo Paulo Dybala and Gonzalo Higuain and Brazil winger Douglas Costa. Check out the video of his medical test.

A post shared by Juventus Academy Colombia (@juventusacademycolombia) on Jul 30, 2018 at 7:45pm PDT

Here are a few other pictures.

The former Manchester United player will reportedly make his first appearance for the club against Chievo on August 19. Recently there was a report which said that Ronaldo has a body of a 20-year old. As per the report, “Ronaldo has 7 per cent body fat which happens to be three per cent than an average professional. The former Real Madrid player has 50 per cent of mass which is four per cent more than an average professional. At the recently concluded 2018 FIFA World Cup, Ronaldo ran 33.98 km, which was the fastest by any player at the mega-event.” CR7 is also nominated for Best FIFA Men’s Player award along with names like Lionel Messi, Kylian Mbappe, Mohamed Salah, Harry Kane, Luka Modric and a few others. Brazil’s Neymar and France’s Paul Pogba did not feature on the list.

(The above story first appeared on LatestLY on Jul 31, 2018 09:38 AM IST. For more news and updates on politics, world, sports, entertainment and lifestyle, log on to our website latestly.com).