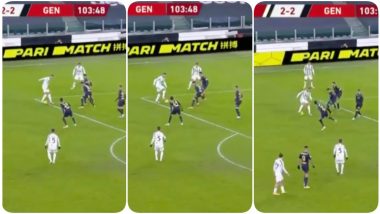 Last night Juventus locked horns with Genoa in the Super Coppa Italia 2021, Round of 16 and Cristiano Ronaldo was left out of the starting XI of the match. But Andrea Pirlo had no other option than to throw in CR7 in the ring as the match headed on to a 2-2 draw.  Cristiano Ronaldo was introduced in the match at the 88th minute. Ronaldo did not fail to live up to the expectations. Few minutes were added to the game and in order to secure a third goal for the team, the Portugal star took on four defenders. Lionel Messi Crowned Playmaker of the Decade, Cristiano Ronaldo NOT Among Top 10 (Check Full List).

At the 103rd minute of the match, Ronaldo received the ball and kept the defenders on their toes. All thanks to his amazing dribbling and the defenders around him could not stop CR7. The Portugal star played a fake shot and fooled the Genoa players and Morata slipped in. Morata then floated a ball into the middle of the area, with Hamza Rafia. The debutant scored a goal. The video of the goal was shared on social media. Check it out below.

The team won the match 3-2 and has progressed into the next round of the tournament. Dejan Kulusevski was the one who scored the first goal of the match within the first 90 seconds. Alvaro Morata chipped in with another goal at the 23 rd minute of the match.

(The above story first appeared on LatestLY on Jan 14, 2021 09:22 AM IST. For more news and updates on politics, world, sports, entertainment and lifestyle, log on to our website latestly.com).