Coppa Italia Free Live Streaming Online: Football returns to Italy with a high octane clash between Juventus and AC Milan in the second leg of the Coppa Italia semi-final. The first leg at the San Siro ended in a 1-1 stalemate between these two great rivals which keeps the tie delicately poised. 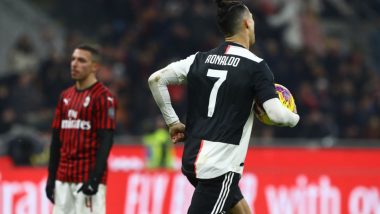 Coppa Italia Free Live Streaming Online Juventus vs AC Milan: Football returns in Italy with a blockbuster clash between Juventus and AC Milan in the second leg of the Coppa Italia 2019-20 semi-final at 12:30 am (IST) on June 13. The first leg at the San Siro ended in a 1-1 draw. Juventus under Maurizio Sarri have not found smooth sailing this term with inconsistency being a key drawback. They find themselves just a point ahead of second-placed Lazio in the Italian Serie A in what is the closest Italian Serie A title race in years. Milan are seventh in the league and struggling to get into the European competition places, which means the Copa Italia assumes added significance for them. Gonzalo Higuain has been ruled out for Juventus after the veteran Argentinian striker failed to recover completely from a muscle injury. Matthijs de Light and Leonardo Bonucci make a formidable pairing at the back with midfielder Blaise Matuidi and Aaron Ramsey providing pace in the middle. Will Cristiano Ronaldo Play Tonight in Juventus vs AC Milan Coppa Italia 2019-20 Semi-Final Second Leg? Check Out Possibility of CR7 Featuring in JUV vs MIL Line-up.

Cristiano Ronaldo fans will finally get to see their superstar back in action though he will likely start out wide. Paulo Dybala will play as the false 9 for the hosts in the attacking third with Douglas Costa on the wings.

AC Milan have some quality players missing due to disciplinary actions with Zlatan Ibrahimović, Samu Castillejo and Theo Hernandez all suspended. Leo Duarte’s fitness issues rule him out of the second leg as well. Ante Rebic showed great goalscoring form just prior to the COVID 19 break and the Croatian forward will lead the Milan attack in the absence of the legendary Zlatan Ibrahimović. Ismail Bennacer have potential suitors in Real Madrid and a good game tonight will only boost his credibility more.  Juventus vs AC Milan Head-to-Head Record: Ahead of Coppa Italia 2019-20 Semi-Finals Second Leg, Here Are Match Results of Last Five JUV vs MIL Encounters.

Coppa Italia 2019-20 semi-final match between Juventus and AC Milan will be played at the Allianz Stadium  on June 13, 2020 (Friday mid-night). The JUV vs MIL football match of Coppa Italia semi-finals is scheduled to be held at 00:30 am IST (Indian Standard Time). JUV vs MIL Dream11 Prediction in Coppa Italia 2019–20 Semi-Final Second Leg: Tips to Pick Best Team for Juventus vs AC Milan Football Match.

Juventus vs AC Milan Coppa Italia 2019-20 semi-final clash will not be live telecast on any television channel in India as there no broadcasters available for Coppa Italia in India. Fans can, however, follow the official social media pages of both Juventus and AC Milan to stay updated with the semi-final encounter.

The 2nd leg of Coppa Italia 2019-20 semi-final match will also not be live-streamed on any channel in India as there are no official broadcasters available for the tournament in India. Moments from the match, including goals and live scores, will, however, be available on online platforms. AC Milan do not look like surviving the Juventus test with a massive difference in quality between the two sides. Expect Cristiano Ronaldo to be on the scoresheet as Juventus look to march on to the finals.

(The above story first appeared on LatestLY on Jun 12, 2020 09:50 PM IST. For more news and updates on politics, world, sports, entertainment and lifestyle, log on to our website latestly.com).