Juventus will host Genoa in the round of 16 fixture of Coppa Italia 2020-21. The encounter takes place at the Allianz Stadium on Wednesday night (January 14). Andrea Pirlo's men must be high on confidence as they come off a 3-1 victory over 10-man Sassuolo on Sunday. 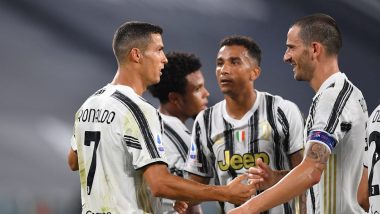 Juventus will host Genoa in the round of 16 fixture of Coppa Italia 2020-21. The encounter takes place at the Allianz Stadium on Wednesday night (January 14). Andrea Pirlo's men must be high on confidence as they come off a 3-1 victory over 10-man Sassuolo on Sunday. Danilo, Aaron Ramsey and Cristiano Ronaldo netted goals to take the Old Lady over the line. On the other hand, Genoa beat Sinisa Mihajlovic's Bologna 2-0 in their last game and would like to upset Juventus as well. Meanwhile, fans can scroll down to get the live streaming, live telecast and other details of JUV vs GEN match. Cristiano Ronaldo Becomes Only Player To Score 15 Goals in Last 15 Seasons.

Speaking of history between the two clubs, Juventus unsurprisingly dominate the head-to-head record with 20 victories in 29 meetings. Only four encounters went in Genoa's favour while the remaining five fixtures resulted in draws. The two teams last faced each other a few weeks ago in the Serie A where Juventus thrashed Genoa 3-1 at the Luigi Ferraris Stadium. Portuguese superstar scored a brace in that game while Argentina's Paulo Dybala also found the nets. All these factors make Juventus firm favourites, and the visitors will have to put up an extraordinary effort to upset the Old Lady. As the game gets lined-up, let's look at the streaming and other details.

Coppa Italia 2021-21 match between Genoa and Juventus will be played at the Allianz Stadium in Rome on January 14, 2020 (Wednesday mid-night). The football match is scheduled to get underway at 01:15 am IST (Indian Standard Time).

Juventus vs Genoa clash will not be live telecast on any television channel in India as there no broadcasters available for Coppa Italia 2020-21 in India. Nevertheless, fans can follow the official social media pages of both Napoli and Juventus to stay updated with the encounter.

Although fans in India might not enjoy Juventus vs Genoa clash on Television, they can still catch the live-action through online streaming. Football lovers need to install the Fancode app or visit Fancode's official website to enjoy the Coppa Italia match.

(The above story first appeared on LatestLY on Jan 13, 2021 08:48 PM IST. For more news and updates on politics, world, sports, entertainment and lifestyle, log on to our website latestly.com).