Juventus are favourites to win this contest with 18th placed Genoa and Max Allegri's side are likely to win this one as well, given their current form and momentum. The match would be played at the Allianz Stadium in Turin on December 6, Monday at 1:15 am IST (Indian Standard Time). 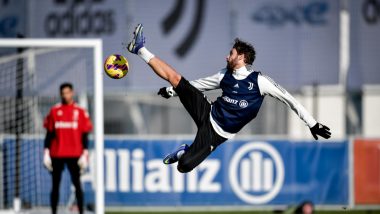 Juventus would take on Genoa in the Serie A 2021-22 at the Allianz Stadium on Monday, December 6. The match would be played at 1:30 am IST (Indian Standard Time). After a terrible start to their domestic campaign, Max Allegri's side finally have regained form and are now eighth on the points table with 24 points. They defeated newly promoted side Salernitana 2-0 and would be looking to carry that momentum into this clash. It should be a relatively easy fixture for the Bianconeri, considering the fact that Genoa are in the relegation zone with 10 points from 15 matches and have had a forgettable campaign so far. Manchester United 1–0 Crystal Palace, Premier League 2021–22 Video Highlights: Fred Scores As Ralf Rangnick Era at Old Trafford Gets Off to Winning Start

When it comes to head-to-head records, Juventus clearly have the edge over Genoa, winning 22 out of a total of 32 matches played between them. A win for Juventus would see them move up to the sixth spot.

Juventus vs Genoa match in Serie A 2021-22 will be played at the Allianz Stadium in Turin. The game will be held on December 06, 2021 (Monday) and the match is scheduled to begin at 01:15 am IST (Indian Standard Time).

Where to Get Live Telecast of Juventus vs Genoa, Serie A 2021-22 Football Match?

Fans in India can watch the Juventus vs Genoa match live on Viacom18 channels as they are the official broadcaster for the Serie A 2021-22 in India.

How to Get Free Live Streaming of Juventus vs Genoa, Serie A 2021-22 Football Match?

(The above story first appeared on LatestLY on Dec 05, 2021 11:08 PM IST. For more news and updates on politics, world, sports, entertainment and lifestyle, log on to our website latestly.com).