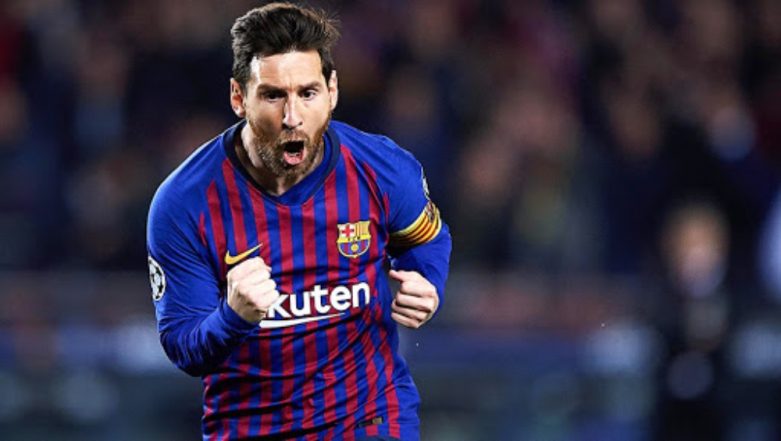 Lionel Messi overtook Cristiano Ronaldo in the all-time club goals list after scoring a brace in Barcelona’s 2-2 draw at Eibar. The Argentine, who has scored 36 goals in La Liga, also strolled to his sixth Pichichi trophy having scored a record 15 goals more than the second-placed Karim Benzema and Luis Suarez.

The 32-year-old guided Barcelona to consecutive La Liga titles in 2017 and 2018. He has scored a tally of 602 club goals from 686 games surpassing Ronaldo, who has one less from 806 games across all competitions. Vincent Kompany Parts Ways With Manchester City After 11 Years, To Take Up Player-Manager Role of RSC Anderlecht.

Both the superstars still have a match remaining this season. While Messi plays his final game against Valencia in the Copa Del Rey final, Juventus will visit Sampordia for their last Serie A game of the season.

Messi also equalled former Athletic Club star Telmo Zarra for the most number of Pichichi awards. Zarra had set a record of winning the trophy six times in 1952-53 and sixty-six years later Messi joins him in the list after clinching a third-straight trophy for most goals scored in a La Liga season. Former FIFA Referee Shivappa Shetty Passes Away at 86.

It is also the first time that the Pichichi award has been won by a clear margin of 15 goals – the previous record of 14 goals was set by Hugo Sanchez in 1986-87. Both Suarez and Benzema have netted 21 times in the league.

The five-time Ballon d’Or winner is well on course for a sixth title having finished a low fifth last season. Messi is also set to win the European Golden Shoe award for a third successive year and sixth time in his career. He has already scored 50 times in 49 games across all competitions this season and recorded a half-century of goals for a fifth straight season.

The Blaugrana skipper is four goals clear of the nearest rival Kylian Mbappe, who scored a double in Paris Saint-Germain’s 4-0 win over Dijon. The French teenager also has a match remaining to overtake the Argentine.