Liverpool vs Chelsea Head-to-Head Record: Ahead of Premier League 2019–20 Clash, Here Are Last Five Match Results of LIV vs CHE Encounters in EPL 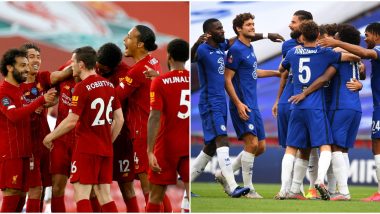 Liverpool will welcome Chelsea for their final Premier League 2019-20 game on Wednesday. It will also be the same night, Liverpool get their hands on the Premier League trophy for the first time in 30 years. Jurgen Klopp’s men head into their final Anfield fixture on the back of a shock 0-2 defeat at Arsenal. They are unbeaten in 58 games at home and had won all 27 home games this season before the 1-1 draw against Burnley. Chelsea will visit Anfield needing a win in their last two league matches to confirm Champions League football. Take a look at the head-to-head (H2H) records between both teams ahead of their next Premier League clash. Anfield Decorated With Life-Size Posters of Mohmed Salah & Co As Liverpool FC Clinch EPL After 30 Years (Watch Videos).

Chelsea beat Manchester United 3-1 in their FA Cup semi-final clash sending Frank Lampard’s side to the final and an opportunity to start his reign at Stamford Bridge with a major trophy. Champions League football will be a cherry on the cake for Chelsea. They will, however, have to beat either of Liverpool or Wolves in their last two league matches to confirm a place in the top-four. Liverpool Captain Jordan Henderson, Merseyside Police Request Fans Not to Come to Anfield for Premier League Trophy Celebrations.

Chelsea confirmed Liverpool’s Premier League title win with a victory against Manchester City in June and will hope to confirm their own UCL berth too with a win against the newly crowned champions. Klopp and his men will, however, be hungry for a win especially after the disappointing loss to Arsenal. The trophy presentation and celebrations after the match will provide them with an added boost to win the game and lift the trophy as credible winners. Take a look at the results of last five Liverpool vs Chelsea Premier League encounters.

This was their last Premier League meeting. Liverpool won the match at Stamford Bridge 2-1 courtesy, first-half goals from Trent Alexander-Arnold and Roberto Firmino goals. Alexander-Arnold gave Liverpool the lead within the opening 14 minutes from a Mo Salah pass and Firmino doubled it 12 minutes later with a sublime strike from Andy Robertson’s cross. Chelsea did pull one back through N’Golo Kante in the second-half but Liverpool held on for a win.

Liverpool needed a win to stay alive in the Premier League title race and they won quite comfortably with two goals in space of three minutes. After a goalless first half, Jordan Henderson found Sadio Mane with a beautiful cross and the Senegalese headed home to give Liverpool the lead. Two minutes later, Mo Salah sent the Anfield roof into eruption with a brilliant strike 25 yards outside the Chelsea box.

Eden Hazard put Chelsea ahead with a sublime finish from a Mateo Kovacic through ball in the 25th minute and Chelsea looked on course to end Liverpool’s unbeaten run until Daniel Sturridge stunned Stamford Bridge with a sensational strike one minute from the whistle. Sturridge scored from 25 yards out to level the game for Liverpool and maintain the unbeaten runs of both teams.

Olivier Giroud’s 32nd-minute strike was enough to seal a win for Liverpool. Giroud headed in from a Victor Moses cross to give the Chelsea the win and maintain Liverpool’s 17-game winless run at Stamford Bridge.

Mo Salah gave Liverpool the lead in the 65th minute from an Alex Oxlade-Chamberlain assist. But with five minutes to go, Eden Hazard found Willian, who equalized for Chelsea. The match ended 1-1 to both teams.

(The above story first appeared on LatestLY on Jul 22, 2020 07:11 PM IST. For more news and updates on politics, world, sports, entertainment and lifestyle, log on to our website latestly.com).