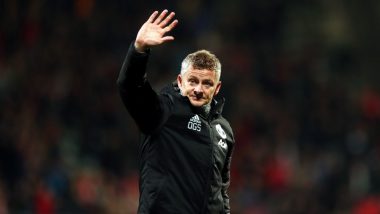 Manchester, June 26: Manchester United manager Ole Gunnar Solskjaer believes Liverpool will find it hard to emulate the sustained success of the Red Devils' 13 Premier League titles in 20 years under Alex Ferguson. Liverpool have been confirmed as 2019/20 champions after Manchester City lost 1-2 to Chelsea at Stamford Bridge on Thursday night, meaning they cannot mathematically be caught in the table.

It is Liverpool's 19th title and they've done so with seven games to spare in the campaign. Revitalised under manager Jurgen Klopp, Liverpool are now champions of England, Europe and the world, having already won the 2019 UEFA Champions League and the FIFA Club World Cup. Manchester City Fans Mock Ole Gunnar Solskjaer After Their Team Thrash Man United 3-1 in Carabao Cup Semis, Angry Netizens Too Slam Red Devils Manager!

The Anfield club enjoyed an impressive win themselves on Wednesday night in their first home game since the league's COVID-19-enforced hiatus, sweeping aside Crystal Palace 4-0. This ended Liverpool's 30-year wait for a title.

"The run of titles that we won under Sir Alex, I don't think that's going to be easy for anyone to emulate," said the United manager during his press conference as shared in a video on Manchester United's official website.

"Sir Alex was a master of staying at the top so, for me, our challenge is to make sure we don't go, say, 26 years until the next time we win it or more. We're going to do everything we can to shorten the distance or even go past them."

Congratulating Liverpool, he said: "Any team that wins the championship and a Premier League deserves it and deserves credit," he said. "It's a hard league to win – well done to Jurgen and his players. Every time you see anyone else lift the trophy it hurts … We want to get back to winning ways and that's our challenge."

(The above story first appeared on LatestLY on Jun 26, 2020 09:50 PM IST. For more news and updates on politics, world, sports, entertainment and lifestyle, log on to our website latestly.com).