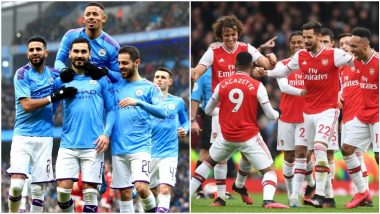 Manchester City vs Arsenal, Premier League 2020-21 Live Telecast and Live Streaming Online in IST: Manchester City are off the boil at the start of the 2020-21 English Premier League season, languishing at 14th in the points table. Pep Guardiola’s squad has been hit by injuries to key players but with the depth, he has invested in, the board will not be happy with the current status. Their style of football has been pedestrian which has irked fans worldwide. Post the international break they welcome Arsenal at the Emirates Stadium looking for a change in fortunes. The Gunners are three points off the top of the table but a poor show against Liverpool raised questions about their credibility against top teams. An out of form Manchester City presents a wonderful opportunity for them to do well against a side they have lost serially to. Mohamed Salah Turns Mr. Incredible to Celebrate Daughter Makka’s 6th Birthday, Liverpool Star Shares Adorable Superhero Fancy Dress Pic on Instagram.

Kevin De Bruyne picked up an injury while playing for Belgium to add more misery to Pep Guardiola’s already limited selection pool. Sergio Aguero has returned to first teams training but is still some time away from regular football. Bernardo Silva will line-up on the right side of midfield with Riyad Mahrez up ahead of him. Raheem Sterling should continue in the lone striker role despite not being at his best there.

Gabriel Magalhaes should start in the left of a three-man defence for Arsenal with David Luiz at the centre. Hector Bellerin and Bukayo Saka provide the width for Arsenal and should venture forward with every opportunity available. Thomas Partey, their marquee signing makes his debut against Manchester City with Dani Ceballos as his partner. It will be interesting to see what role Grant Xhaka plays now considering Partey is one of the best defensive midfielders in the world.

Manchester City vs Arsenal match in English Premier League (EPL) 2020-21 will take place on October 17 (Saturday). The match will be played at the Etihad Stadium in Manchester and it is scheduled to start at 10:00 pm IST (Indian Standard Time).

Where to Get Live Telecast of Manchester City vs Arsenal, Premier League 2020-21 Football Match?

How to Get Free Live Streaming of Manchester City vs Arsenal, Premier League 2020-21 Football Match?

Fans can also follow live action online. Disney+ Hotstar, the OTT platform of Star Network, will be live streaming the Manchester City vs Arsenal match for its online fans in India. JIO and Airtel subscribers can also follow the game live on JIO TV and Airtel TV. Arsenal beat Manchester City in the FA Cup semis but they will be more than happy with a point here considering their poor past record at Etihad in the EPL.

(The above story first appeared on LatestLY on Oct 17, 2020 03:23 PM IST. For more news and updates on politics, world, sports, entertainment and lifestyle, log on to our website latestly.com).