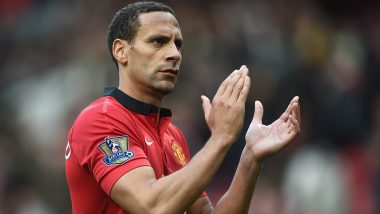 Manchester United great Rio Ferdinand in a recent interview revealed that he rejected a move to Barcelona to stay with the Red Devils. Ferdinand is considered as one of the best defenders to play for England and is hailed as a legend in the Red parts of Manchester where he spent 12 trophy-laden years winning Premier League title six times and securing Champions League glory once in 2008. The England defender joined Sir Alex Ferguson’s team in 2002 from Leeds United. Manchester United Donates Medical Equipments to National Health Service Amid Coronavirus Pandemic.

Speaking to BT Sport, Rio Ferdinand revealed that Barcelona and their coach at that time Frank Rijkaard came calling in 2008 when the two teams met each other in the Champions League. ‘It was after the game in Barcelona, in the tunnel after the game when I spoke to Rijkaard. There is an etiquette but you get the gist of what someone is saying,’ Ferdinand said. Premier League Clubs To Receive Advance Payments To Aid Cash Flow Amid Coronavirus Pandemic.

‘It came close. There were discussions with my agent, Barca had touched base. I'd spoken to Riijkard, not about going there but he made his feelings known.’ The United legend added. Rio Ferdinand further said that he had thought of playing abroad but the only thing that stopped him was Manchester United and it was impossible for him to leave the club.

‘The problem with me going abroad, I always said I definitely wanted to go abroad and play, but the only thing that would ever have stopped me was if I was successful on home shores and I was lucky and fortunate to find a great club in Manchester United where it was going to be almost impossible for me to leave.’

Rio Ferdinand also mentioned that Barcelona were a team in transition and United had defeated them on their way to European glory so there was no reason for him to join the Spanish side. The England defender made 455 appearances for Man Utd and was one of the most important players in their most successful modern era.

(The above story first appeared on LatestLY on Apr 09, 2020 11:55 PM IST. For more news and updates on politics, world, sports, entertainment and lifestyle, log on to our website latestly.com).