Manchester United will begin their Premier League return with a clash against Jose Mourinho’s Tottenham Hotspur on June 20. The League had confirmed the dates of club’s first three matches post the resumption. But United have added provisional dates for their remaining matches giving fans a sense as to when the rest of matches could be played. 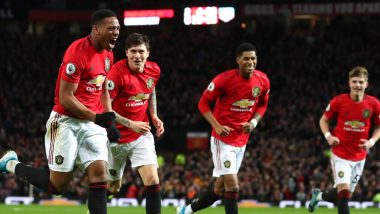 Manchester United will visit Tottenham Hotspur for their first Premier League 2019-20 match after a three-month hiatus during which the Premier League was halted due to the coronavirus pandemic. The Premier League is set to resume on June 17 with Man City facing Arsenal and Aston Villa taking on Sheffield United before a full round of fixtures begin two days later. United were on a sweet run of 10 unbeaten games and just three points behind the fourth-placed Chelsea in the Premier League when the football season came to a halt due to the COVID-19 virus. Premier League New Schedule for Restart: Check Out Fixtures, Match Timings in IST of English Football League 2019-20 Season.

United and manager Ole Gunnar Solskjaer will hope that his side can resume at the same pace when they visit London for a clash against Jose Mourinho’s Tottenham Hotspur on June 20. The Red Devils already beat Spurs 2-1 at home, thanks to a Marcus Rashford double when they met in the reverse league fixture and will hope to complete a double. They are on the race for a top-four finish and will need to win as many games possible from their remaining nine league matches to ensure Champions League football for next season. Take a look at United’s restructured schedule for the remainder Premier League 2019-20 season. Manchester United Finally Begins Training at Old Trafford; Jesse Lingard, Harry Maguire, Fred Rodrigues & Others React! (Watch Video & See Pics).

The Premier League had already confirmed the dates of United’s first three matches post the resumption. But United, on Monday, added provisional dates for their remaining matches giving fans a sense as to when their the rest of the matches could be played. The fixture scheduled confirmed by the Premier League were Tottenham (June 20), Sheffield United (June 24) and Brighton (July 01) leaving out dates for the rest of the six matches to be announced later.

In addition to the Premier League, United are also part of the FA Cup and will face Norwich City in the quarter-finals on June 27. A win at Norwich could once again reschedule a couple of their league matches with the FA Cup semi-finals confirmed to play on July 18 and 19. The final will be played on August 1.

The Red Devils’ Europa League campaign is, however, under serious doubt with UEFA still to come to a decision on the fate of the current ‘suspended’ season. United were due to welcome LASK at home for the second leg of the Europa League round of 16 before the season came to an abrupt halt. Solskjaer’s men lead LASK 5-0 after the first leg.

(The above story first appeared on LatestLY on Jun 09, 2020 02:16 PM IST. For more news and updates on politics, world, sports, entertainment and lifestyle, log on to our website latestly.com).