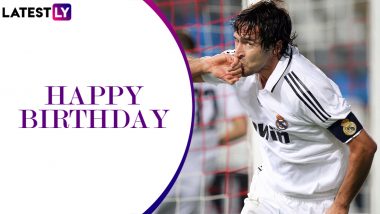 Real Madrid and Spanish legend, Raul Gonzalez celebrates his 43rd birthday today (June 27, 2020). The striker was arguably the most influential figure in Los Blancos history during the early 2000s and is considered as one of the greatest Spanish players of all-time. Raul spent 16 years at Real Madrid before moving to Schalke and is the club’s second-highest goalscorer of all-time with 323 strikes in 741 appearances. The Spaniard has now returned back to Madrid and manages their reserve team, RM Castilla. Champions League All-Time Top GoalScorers.

Born in Madrid, Raul started his footballing career at the youth academy of Atletico Madrid but later moved to cross-town rivals, Real Madrid, where he played at various youth levels. He signed his first professional contract in 1994 with Los Blancos’ C team but after scoring 16 goals in just seven games, was quickly promoted to the first team.

Raul won several major honours with Real Madrid including six La Liga titles, three UEFA Champions Leagues and four Copa Del Rey’s. During his time in Spain, Raul won two Pichichi trophies (1999, 2001) and the top goalscorer award of the UEFA Champions League (2000 and 2001). So on the Spaniards 43rd birthday, we take a look at some of his best goals.

This is the other goal from the 2002 UEFA Champions League final between Real Madrid and Bayer Leverkusen. Though it never got the attention, the goal was crucial as Raul eased early nerves by opening the score in the 10th minute of the game.

This was one of the most intense El Clasico's ever witnessed and Raul had the final say. Barcelone came back from a goal down to least 2-1 but in the closing minutes, Raul equalised and then rolled away in celebration as he hushed the entire Noe Camp.

On the 11th matchday of the 2011-12 season, Schalke players combined to produce a sensational team goal against FC Koln. Raul combined on the edge of the box and finished the move with a brilliant chip over the goalkeeper, who was left in no man's land.

The goal was scored in the 2002 semi-final of the UEFA Champions League. Madrid in search of their fifth UCL title in five years met arch-rivals Barcelona and Raul produced a moment of sheer brilliance. On his weaker left foot, the Spaniard struck one into the top corner.

This goal against Hannover 96 in the Bundesliga shows why Raul was one of the top goal-scorers in world football. The Spaniard received the ball from Farfan in a tight space but manoeuvred his way past the defence and then dribbled the keeper to score a sensational solo goal.

After successful spells at Real Madrid and Schalke, Raul played the latter part of his career in Qatar and the United States. The Spaniard announced his retirement in 2015 and began his managerial career in 2018 by coaching Real Madrid's U-15 team and now manages RM Castilla

(The above story first appeared on LatestLY on Jun 27, 2020 09:00 AM IST. For more news and updates on politics, world, sports, entertainment and lifestyle, log on to our website latestly.com).