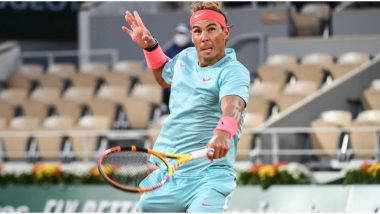 Paris, October 11: Rafael Nadal on Sunday won a record-extending 13th French Open title after beating his rival and world No.1 Novak Djokovic 6-0, 6-2, 7-5 in the final. This is Nadal's 20th Grand Slam title that equals Roger Federer's record for most major wins for a male singles player. This was also his 100th win at the French Open, having lost just two matches since making his senior debut at Roland Garros in 2005, which was also the year he won his first title at the clay court Grand Slam.

In a match that lasted two hours and 42 minutes, Nadal served out the opening set with an ace, thus holding Djokovic, who was looking to become the first man in the Open Era to win all four Grand Slams twice. It was only 48 minutes into the match that Djokovic managed to win his first game. Rafael Nadal vs Novak Djokovic VIDEO HIGHLIGHTS: Rafa Matches Roger Federer's Record of 20 Grand Slam Titles After Beating Djokovic in French Open 2020 Finals.

The only shift in momentum in the match came in the last set when Djokovic matched Nadal step for step. It was a double fault that gave Nadal the chance to serve for the title, and he saw it through with relative ease.

This is the first time since the 2014 French Open that Nadal managed to beat Djokovic in a Grand Slam final. In major finals since then, Djokovic had beaten Nadal in a five-set thriller at the 2018 Wimbledon final and then the 2019 Australian Open final in straight sets.

(The above story first appeared on LatestLY on Oct 11, 2020 10:34 PM IST. For more news and updates on politics, world, sports, entertainment and lifestyle, log on to our website latestly.com).